The Terran Knowledge Bank
(Redirected from Privateer 2: The Darkening)
Jump to: navigation, search

Developed in the period following the success of Wing Commander III, Privateer 2: The Darkening was conceived as a cinematic evolution of the Privateer gameplay model. Privateer 2 was developed in the UK by Erin Roberts and his team at EA Manchester with its full-motion video cutscenes filmed on sets built at the legendary Pinewood studios. The game puts you, the player in the shoes of Ser Lev Arris, a mysterious figure in search of his past, and lets you play the game your way. Boasting an all-star cast, the game stars Clive Owen as Ser Arris, supported by Christopher Walken, David Warner, Jürgen Prochnow, Mathilda May, and John Hurt, among others.

Set in 2790, The Darkening takes place in a remote corner of the Wing Commander universe known as the Tri-System. Planet Anhur has been home to humans for some two thousand years, with the locals having independently developed faster-than-light drives from the Confederation. The futuristic setting lets players utilize advanced jump gates, short-range time travel devices and massive cargo haulers. In addition to the traditional build-up phase and story portions of the game, Privateer 2 peppers the experience with random cinematic mini-plot missions. Certain upgrades are only available once these subplots have been completed, and entire character arcs are explored with recorded video cutscenes separate from the main story. 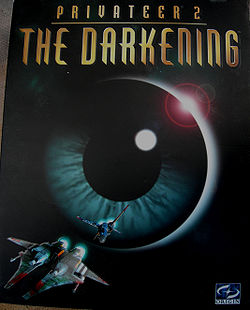 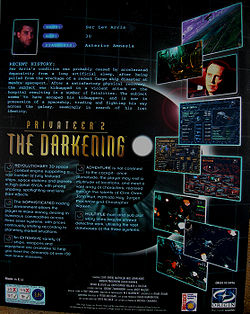 RECENT HISTORY:
Ser Arris's condition was probably caused by accelerated
>depassivity from a long artificial sleep, after being
pulled from the wreckage of a recent Cargo ship disaster at
Mendra spaceport. After a satisfactory physical recovery,
the subject was kidnapped in a violent attack on the
hospital resulting in a number of fatalities. The subject
seems to have escaped his kidnappers, and is now in
possession of a spaceship, trading and fighting his way
across the galaxy, seemingly in search of his lost
identity. 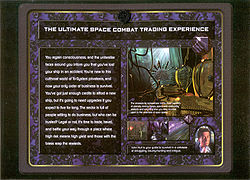 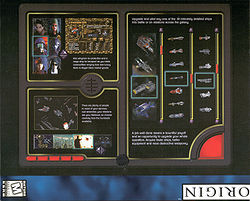 You regain consciousness, and the unfamiliar
faces around you inform you that you've lost
your ship in an accident. You're new to the
cutthroat world of Tri-System privateers, and
now your only order of business is survival.
You've got just enough credits to afford a new
ship, but it's going to need upgrades if you
expect to live long. The sector is full of
people willing to do business, but who can be
trusted? Legal or not, it's time to trade, travel,
and battle your way through a place where
high risk means high yield and those with the
brass reap the rewards. 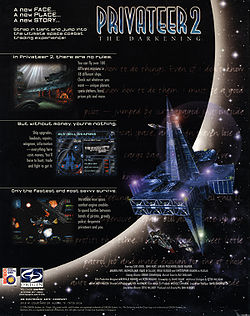 Strap in tight and jump into
the ultimate space combat
trading experience!

In Privateer 2, there are no rules.
You can fly over 100
different missions in
18 different ships.
Check out whatever you
want ― unique planets,
space stations, bars,
prison pits and more.

But without money, you're nothing.
Ship upgrades,
loadouts, repairs,
wingmen, information
― everything here
costs money. You'll
have to hunt, trade,
and fight to get it.

Only the fastest and most savvy survive.
Incredible new space
combat engine enables
hi-speed battles between
bands of pirates, greedy
police, desperate
privateers and you. 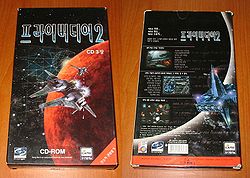 Korean Box), Front and Back

Here's something a lot of people don't know: different versions of Privateer 2 featured readically different manuals! It's strange but true - the original UK release came with a "Crius Hospital Rehabilitation Guide" and an in-universe "Guide to Space Travel"... while the American version came with a single booklet, "Your Guide to the Universe".

see Privateer 2: The Darkening: Behind the Screens

Pages in category "Privateer 2: The Darkening"

The following 15 pages are in this category, out of 15 total.