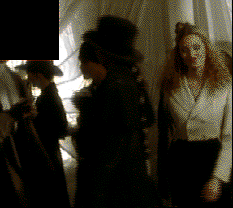 BACKGROUND:
Reputedly the oldest hostelry in the Tri-System, the Shadow Play is where old soldiers go to die and young soldiers go for a final good time before encountering certain death on reconnaissance missions out in the Humanist held territories. It's ancient plascrete toilet walls bear graffiti which is so old that the dialect in which it is written has completely disappeared from common usage, which is fortunate, as some of the Anhur Literary Institute's most repellent documents are transliterations of these semi-literate scrawls. The bar was recently acquired by intersystem eatery chain Farma Foods, which prompted fears of renovation, but fortunately the corporation has made it clear that it wishes to keep the bar in its present state, much to the relief of the clientele.