Outside of CIS offices, not much is known about the Kindred. Although Kindred operatives have been caught and prosecuted in recent years, the structure of the organization appears to successfully conceal the identity, whereabouts and enterprise of clan leaders from the "lower ranks" who carry out smuggling, mercenary and laundering activities. The Kindred are known to use civilian convoys to mask their identity and operations, and it is believed they have influence with some of the pirate clans, particularly the Papagods.

It is rumored that the Kindred have successfully bribed and bullied many government officials and CIS operatives into silence. This decade's significant increase in assassinations — most of which have been attributed to the Kindred — indicates at least their desire to gain influence over governmental process and their willingness to kill anyone who will not play along. And, although Kindred-related crime has risen throughout the decade, the arrest and conviction of Kindred operatives has inexplicably fallen. 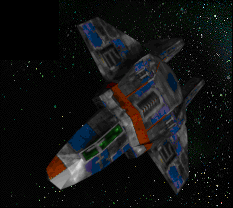 BACKGROUND:
The Kindred is an organisation shrouded in mystery and mythology. Without doubt the Tri-System's largest, indeed perhaps only, crime syndicate, no-one is sure how far their influence extends. What is certain is that their resources are immense; the CIS bureau has a permanent force of over 3000 ships detailed solely with the interdiction of Kindred forces, and almost 90% of stellar piracy is attributed to them. Their power extends far beyond the military, and several planetary governments are thought to be in their sway, along with several of the Tri-System's largest corporations. The Kindred are reputedly headed by a shadowy figure known only as 'Kronos', though whether he is an individual or a group can only be guessed at.