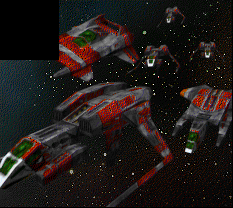 BACKGROUND:
The second of the humanoid pirate clans known to be at large, this lot project a slightly darker and more sinister mystique than the Jincilla 'hippies'. They are thought to be a collection of fairly lightweight career criminals, favouring computer hacking and fraud as opposed to violent robbery and assault. However, do not be fooled. Their ships will invariably contain the latest state-of-the-art kit to make your day miserable. Keep well clear.

Although these guys are lightweight career criminals who specialize in computer hacking and fraud, do not underestimate them. They are not above preying on civilian and military transports, and they are particularly attracted to weapons shipments. They tend to arm their own ships with state-of-the-art technology. They also run out of resources every so often and have been known to use the mercenaries mailing list in a pinch. They are extremely suspicious of the Papagod, whom they suspect to be in alliance with the Kindred.

Three of the four P2 pirate clans are named after American Indian tribes from the southwestern United States. The Kiowa are the most obvious, taking their name verbatim from the Kiowa tribe.