Citizens of Hermes answer to no creature. The planet is renowned for its bars and its seedy, run-down dives — home to the sort of lower high life popular with mercenaries, artists and entrepreneurs. Everyone you meet there has his, her or its eye on the shortcut, the quick buck and the easy living. Opportunities abound in this back room — trust no one, but give everyone your ear. 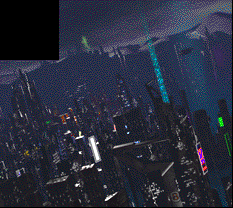 BACKGROUND:
If ever I was asked which my favourite planet was, I'd be shouting 'Hermes' into the ear of the unfortunate inquirer before his epiglotis stopped waggling. Rundown, corrupt, decadent, noisy and violent, it embodies everything that is fun about being a pilot; heavy drinking, making passes at unsuitable women, consuming outrageously dangerous narcotics and finally getting embroiled in a good, honest punch-up. Less stuck up and crowded than Hephaestus and Janus, much more habitable than Anhur and Hades, infinitely more interesting than Crius and Bex, its only real competitor for a big-time good time is Karatikus, and there are far fewer hippies on Hermes, which kind of wraps it up. But don't just take my word for it... get yourself down there, soak up the ambience, have a drink in the Sinner's Inn (without a doubt the most dangerous place in the galaxy now that they've drained Waste Pool #3 on Hades), and generally appreciate a world which has given rise to more artists, pilots, entrepreneurs and Vidflix makers than any other.