Wing Commander Academy was a television series produced by Universal Cartoon Studios. A single season of thirteen episodes were aired from September 21, 1996 to December 21, 1996 on USA Network as part of the station's Action Extreme Team. The series was developed as a prequel to Wing Commander III: Heart of the Tiger and reunites Mark Hamill, Tom Wilson and Malcolm McDowell voicing younger versions of their characters. Dana Delany also stars. The series heavily references the settings, ships and other lore elements of Wing Commander I and II.

Wing Commander Academy originally scheduled on the USA Network on Saturdays at 11:30 AM, with episodes premiering from September 21st to December 21st, 1996. A rerun was aired on October 28th, likely because of production delays. The show was packaged as part of the kid-focused Action Extreme Team block of programming which would premiere original programming on weekends and syndicated content weekday mornings. Academy was the penultimate show in the block, running between Street Fighter at 11 AM and Mortal Kombat at noon. Episodes would air again the following day at the same time. For the November 16th premiere (and November 17th rerun) of Recreation, the order of shows was altered to match the Warrior King crossover event. Wing Commander Academy at noon instead of 11:30, closing out the block and the crossover those days. The series continued to appear in weekday reruns into 1998 when USA Network dropped all children's programming permanently.

Wing Commander Academy's episodes have been presented in a number of different orders. When the series was first broadcast issues relating to the outsource animation studios and the need to air Recreation alongside the other Action Extreme Team shows on a specific date caused USA Network to premiere the series in an order different from how it was produced. While most of the stories stand alone, several do intentionally reference one another in a way impacted by this change; for example, Chain of Command (1x06) was intended to follow Expendable (1x07) and references the events of that story ("Bergstrom: Cadet Blair, I understand you lead the recon through the jump node that discovered the Kilrathi fleet. Maverick: Yes, Admiral. Cadet Price flew wing."). Star*Soldier, the manual for Wing Commander Arena, included several Academy episodes in an updated timeline which establishes canonical dates for several episodes and implies an official timeline order. The 2012 DVD release introduced another order which does not match production or the narrative.

The following dates are listed in the Star*Soldier timeline for Wing Commander Academy stories:

Personalized embroidered jackets were given to members of the series' production team. The jackets were manufactured by Carhartt. Example pictured belongs to "Cleavage". 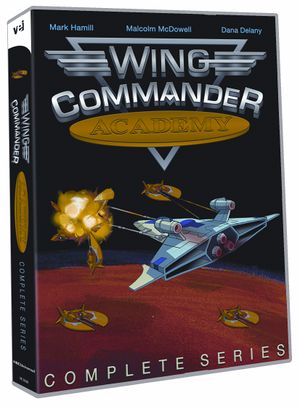 Wing Commander Academy Complete Series was released on DVD in Region 1 on May 29, 2012. The DVD set was produced under license by Canadian company Visual Entertainment Inc. (VEI) for the release and distributed by First Look Studios/Millennium Entertainment in the United States. The only extra included is animated menus. The package includes all thirteen episodes on two discs. The release is packaged in a standard Keep Case with a cardboard slipcover.

The order of episodes on the DVD does not match the previously used air date, timeline or production order. Disc 1: Red and Blue, The Last One Left, Most Delicate Instrument (sic), Chain of Command, Lords of the Sky, Word of Honor, Expendable. Disc 2: Invisible Enemy, Recreation, On Both Your Houses, Walking Wounded, Price of Victory, Glory of Sivar

In the year 2655, a generation-long battle rages between the Terran Confederation and the evil Kilrathi, a feline race of savages bent on destroying humanity.

A trio of spirited novice fighter pilots (voiced by Mark Hamill, Dana Delany and Thomas F. Wilson) are thrust into battle under the command of the legendary Commodore Geoffrey Tolwyn (Malcolm McDowell). Skills will be tested and friendships forged as they fly missions more dangerous than they could have ever imagined.

A spirited and elite corps of novice fighter pilots attends the Wing Commander Academy in the year 2655. Often thrust into battle against the mighty and ruthless Kilrathi race, the crew must master daring manoeuvres and veer through constant danger to save the world. Sedate and honorable Maverick, devil-may-care and impulsive Maniac, and serious-minded, cautious and competent Archer make up a quarter of the cadet wing at the academy under their brilliant, if argumentative, captain, Commodore Tolwyn.

Issues with the sound mixing causes some in-flight dialogue to be drowned out by music. This is especially noticeable during the first simulated dogfight in Red and Blue although it is present throughout the DVD episodes.

Wing Commander Academy is available streaming through NBCUniversal's Peacock service. The series became available with early previews of the Peacock service for Comcast users starting on April 15, 2020 and was released to the general public starting July 15, 2020. Episodes are presented in production order and feature newly generated captions. Universal Cartoon Studio's Savage Dragon, part of the Action Extreme Team crossover event, is also available for streaming via Peacock for the first time.

In the year 2655, a group of new graduates of the Space Naval Academy replaces the crew of a refurbished ship to complete training, but members find themselves taking part in a very real battle against the Kilrathi. 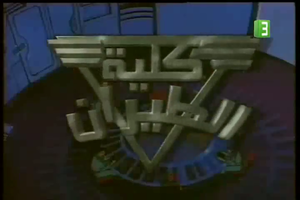 Wing Commander Academy was localized in Arabic by Al-Zhra Center and broadcast in the Middle East by Space Toon. The dub made several changes to the show including new credits and several edits for content. The series aired in production order. The series was also aired on MBC 3, a free-to-air children's network broadcasting from the United Arab Emirates, in 2006.

Low quality off-air dubs of the Arabic version of Wing Commander Academy are available for download. Only the first episode includes the introduction and credits.

Several scenes were edited for content in the dubbed version of On Both Your Houses. Shots of Archer wearing a nightgown were clipped and a scene in which Dr. Sing, Maverick and Maniac wear swimsuits was removed entirely. The most interesting change is that the dubbed version replaces the instrumental theme songs with an original song that features lyrics. A short clip of the Kilrathi tug towing the Warrior King's sleeper ship from Recreation was added to the end of the introduction so it would match the running time of the song. The credits were also redone, with translated text scrolling over clips from the series while the same song plays.

Fly Soar
Like an eagle
Growl Roar.. Decimate evil
Fly Soar
You are the toughest
Quenched your thirst from the fountain of courage
The enemy of virtue ..a bully
Tyrannical catastrophic malicious unjustly
Clear sky is now bloody
Maneuver aim
Incinerate the enemy
Roar Growl
So our sky is clear again
Fly 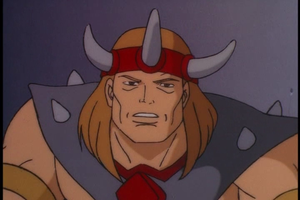 Wing Commander Academy is part of an elaborate four-series crossover event which was largely unknown and unexplained at the time it aired. USA Network's Action Extreme Team, a block of boy-focused animated programming, launched in the 1995-96 television season. Action Extreme Team ran original series on weekends and syndicated content during the week. For the 1996-97 season, USA renewed two shows for a second season, Savage Dragon and Street Fighter, and added two more, Mortal Kombat: Defenders of the Realm and Wing Commander Academy.

As a result, the 1996-97 programming block was largely video game oriented, with Savage Dragon (based on a comic book character) being the only exception. To promote the programming, USA Network developed a crossover event that would connect all four shows with a single overarching story. As all four shows featured licensed characters, they could not simply team up and have them appear together. Instead, an original character and story line was created who would travel from one show to another without directly referencing each other. While three of the shows featured contemporary settings, Wing Commander Academy was set 600 years in the future.

On the production side, the project required a level of coordination not usually seen in children's animation. The four shows came from a total of three different production companies (Street Fighter was produced by InVision Entertainment, Mortal Kombat: Defenders of the Realm by Threshold Entertainment and Savage Dragon and Wing Commander Academy were from Universal Cartoon Studios) that would need to coordinate on the shared story and art. The shows would need to be ready to air on the same day and even USA Network's broadcast schedule would need to be altered to allow the story to play out in the correct order.

The character and overall story line was developed by veteran animation producer and artist Will Meugniot. A Conan the Barbarian-styled character named The Warrior King would travel from world to world in search of the Orb of Power, a gleaming sphere capable of controlling any planet's weather. His story began with a brief prologue at the start of the Street Fighter episode in which his planet, Warrior's World, is under siege by "the hated Wizards". The Warrior King's advisor, Ralph, opens a portal through time and space and binds him to the Orb in order to protect it. From there, he appears in Street Fighter where he teams up with Chun-Li to stop series villain M. Bison from using the Orb's powers to take over the Earth. Next, he travels to Savage Dragon where he faces off against The Fiend, a supervillain seeking to use the Orb to amplify their own powers. Mortal Kombat focuses on The Orb, now in the possession of Shao Kahn who intends to use it to defeat Rayden. The Warrior King appears in a single shot, chasing the Orb through a portal at the end of the episode which was said to be sending it to space. Finally, Wing Commander Academy's episode concludes the story with the Warrior King awakening on a cryogenic sleeper, finally locating the Orb on the planet Oasis (and ultimately deciding not to return it to Warrior's World). The Warrior King was voiced in his three speaking appearances by Michael Dorn, best known as Worf from Star Trek.

While the crossover was successfully developed, outside events conspired to make it irrelevant. By the time the event aired on November 16, 1996, USA Network had already decided to drop original children's animation for 1997-98. As a result, the crossover was never promoted in any way: there were no advertisements explaining what was happening or bumpers airing mentioning the crossover. The only clue to anyone that something was off was that the airing schedule did not match the usual as the shows time slots were still rearranged (Street Fighter, Savage Dragon, Mortal Kombat: Defenders of the Realm and Wing Commander Academy). Anyone tuning in to just one episode remained completely unaware that they were watching a major crossover event.

Savage Dragon has not been released on home video.

Street Fighter is available for streaming from Amazon. Episodes can be purchased for $1.99 USD or streamed free with an Amazon Prime subscription.

Savage Dragon is available for streaming with an NCBUniversal Peacock subscription.

Warrior King: I refuse! I will not abandon Warrior's World to the corruption of the hated wizards.

Ralph: My liege, victory is within their grasp. If the Orb falls into their hands, our world will fall into eternal darkness. You must be true to your mantle of warrior king and protect your land even at the cost of your own pride.

Warrior King: It galls me, Ralph, to forsake my people.

Ralph: You do not forsake us, my liege. You are protecting the Orb that sustains our world. Without the power of the Orb to sustain Warrior's World we shall be forced to leave or stay and perish. Then, it shall be time for you to return. You are now bound together and shall always be drawn one to the other. Now go, step into this chasm of time and space. Go and return to us safely.

Wizard: The Orb is ours! (screams)

Warrior King: Wrong! The Orb belongs to me and my people.

Wizard: Not for much longer.

Ralph: Follow it, my liege. Find it wherever it lands in time and space. Your world awaits your return oh mighty Warrior King.