One of the Irrulan system's two planets, Bex was the second to be settled, in two near-simultaneous but entirely seperate waves, and has a reputation as being peaceful but dull — so dull, in fact, that there is some confusion as to which star system the planet actually resides in. Despite (or, perhaps, because of) this, Bex has managed to produce some fine combat pilots, notably Wendy Wellington and Leon J. Spudley.

Its most famous export is the eponymous "Bex Beer", the brew of choice for all true alcohol aficionados of the Tri-System.

Largest of the primarily agricultural planets, Bex has become galactically famous for Bex beer, which is its chief manufactured export, and for the laid-back religion that reveres this beer ― the Church of Hom. Bex's suitability for agriculture and its early settlement by Humanists from Anhur have kept it largely rural and a bit behind the times, despite its proximity to Hephaestus. 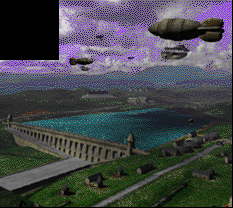 BACKGROUND:
Or 'Hicksville, Isaac', as its better known. The butt of just about every joke ever told, Bex is notorious for four things: agriculture, religion, beer and stupidity. Although the last reputation owes much to the previous three, its origin goes right back to the manner in which the planet was settled; some time before the d-drive was invented, a colony ship was dispatched from Hephaestus on the 119-year journey that separated the two planets at the time. Unfortunately for the colonists, the d-drive was invented some 70 years after they left, and so the expectant settlers landed on the planet only to find that another group of settlers had arrived 30 years previously, their journey having taken a mere four weeks. What was worse, a goodly proportion of the second batch of colonists had been Anhurians, and a new, more pacifistic version of Humanism, the Church of Hom, had taken firm root on the planet. Given the cumulative effect of these revelations, it is not altogether surprising that an obsessional interest in the production of intoxicating liquor took hold amongst the Hephaestan settlers, an interest which developed into Bex's prime export industry. Nowadays, Bex is a peaceful, laid back planet, producing the majority of the Tri-System's beer, 'real' food, and incomprehensible religious tracts. The thrill-seeking pilot may find it a little dull - terrestrial pastimes number straw-chewing, dungaree wearing and line-dancing among the most popular - but for the trader looking to make a good living, Bex Commodity Exchange is one of the most important buildings in the galaxy. Just don't talk to any of the glassy-eyed fanatics that populate the starport; they're more difficult to get rid of than a dose of Hermetic Chlamydia.