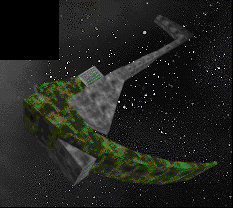 BACKGROUND:
A kind of Pirate Clan's Pirate Clan, the Papogod are the first, middle and last word in interplanetary outlaw terror. Publishing law prohibits us from describing almost all of the exploits of this Mutant Clan on the grounds of common decency. Let's just say that it isn't very wise to be captured by the Papagod unless you wish to be very painfully mutated over a period of five years, 'just to see how you like it'. If you meet these guys, hit self-destruct. It is also rumoured that there may be a close link between them and the Kindred.

Little is known about this clan, but it is repeatedly the most dangerous in Tri-System space. Papagods tend to travel in large groups and prey on military vessels and convoys. They are reported to have strong links to the Kindred.

The Papogod may take their name from the Tohono O'odham, derogatively known as the "Papago".

Game text refers to the clan as the Papogod and Papagod interchangeably.