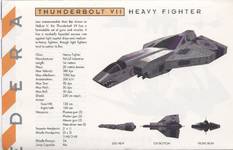 
The special "feelie" included in Wing Commander III was a fold-out poster called "Warbirds" which showed the game's Terran and Kilrathi fighters. The version included in the standard game was monochrome... but the one included with the Premiere Edition was full color!


We have discovered an additional capital ship commented out of Victory Streak. In the manual's Quark files are located the following specifications for a Confederation heavy carrier:

Also interesting--in every manual revision, the dreadnaught is 22,000km long, despite many other changes to ship specifications. Take what you will from that!