Wing Commander I virtually created the space combat simulation genre when it arrived in the fall of 1990. It wasn't the first game where players flew a ship around in space, but it was the first to combine cutting edge graphics, a branching mission tree, complex characters and an exciting storyline. As a rookie pilot aboard the TCS Tiger's Claw, the player was introduced to the viscious feline Kilrathi. Over the course of dozens of missions, the Terran Confederation managed to force the Empire of Kilrah out of the Vega Sector. PC gamers used the original Wing Commander game to show off their powerful new 386 machines to their friends. The game exuded style and polish from the cockpit hand that followed players' joystick movements to the dripping bucket in the barracks. 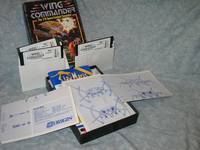 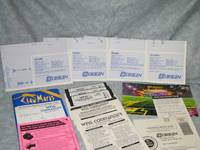 You're a starfighter pilot, the best of the best, but nothing in your training prepared you for action this hot. Deepspace dogfights against Kilrathi aces are deadly, and the future of humanity is on the line each time you fly!

Wing Commander puts you in the middle of the most intense starship action you've ever experienced outside of a movie theater. But in Wing Commander, you're the star!

Created by Aaron Allston, Claw Marks was an astonishing piece of in-universe fiction included in the box of the original Wing Commander. The booklet didn't tell you how to play the game, it treated you like you were a 27th century fighter pilot catching up on the news between missions. The ship specifications, pilot-of-the-month bios and in-universe editorials became the standard for the franchise going forward. Chris Roberts has always sought for an immersive game experience, and the inclusion of Claw Marks meant that Wing Commander offered it before the player could even insert the first disk. more...

Wing Commander I continued an Origin tradition of including 'feelies' in the box. Ultima games would include an ankh or a rune stone, Auto Duel included a tiny tool kit... and Wing Commander I had a set of space fighter blueprints! more...

This document walks the user through the installation process and illustrates how to move about the ship, talk to people and fly a mission. more...