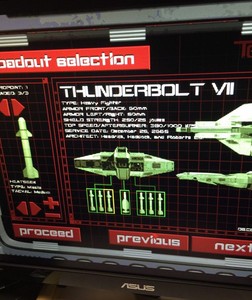 
Pressing ALT+S in the game's fighter loadout screen displays a handful of bonus stats and info. All of the details of today's findings were extracted from the game's .tre files almost ten years ago, but they were regarded as an oddity left over in the code. The fact that they were available in the game raises some tantalizing questions concerning the timeline! Ship type designations and numerical designations are neat enough, but the "service dates" and "architects" are where things get really interesting. WC3's Warbirds Poster gives us "manufacturers" like Douglas Aerospace and McCall Industries. A whole new complimentary set of builders and designers are now revealed as well. The intriguing dates are likely to drive the most debate. They range from May 11, 2660 to March 17, 2676! Numerous sources corroborate a 2669 setting for WC3 and 2673 for WC4. Furthermore, most of the fighters are seen in action in 2654 during Wing Commander Academy. So what could a service date be? Why are some in the future? Could there have been a plan to set the game in the later 2670s at one point? What other explanation could there be? It's not every day new material is added to the canon, so we're anxious to hear your theories!


There’s a well known anecdote from the development of WC1 that talks about how an error message when quitting the game was changed to “Thank you for playing Wing Commander.” That story now has a sequel thanks to a tweet by WC3 programmer Robin Todd! In this case, there was a random crash that was changed to resemble a CD-ROM error. Apparently blaming the new-fangled optical technology was an easy solution, and, fortunately, this error was never prolific and didn’t negatively affect the player experience. It makes a great bit of trivia now!

on Wing Commander 3 we had random memory crash. no time to fix. we re-wrote DOS error table so resulting output would be "CD-ROM read error"