Pilgrim Stars is the first of two contracted "movie novels" - following the events of the Wing Commander adaptation. The third book, Pilgrim Truth, was completed but never officially published. 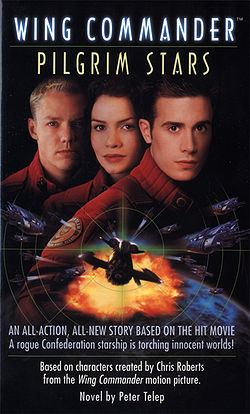 Welcome to the real world! Christopher Blair, his sexy flymate, Dev, and his pal Maniac graduated from the Confed's elite Academy straight into a nasty, three-way war. Their ship, the Tiger Claw, is battling not only alien Kilrathi destroyers, but rebels who have stolen the swift Rapier and Broadsword fighters of the Confederation!

Claw and crew are caught in the middle of a deadly rebellion, led by rogue Pilgrims who want to cleanse the Universe and reseed it with perfect humans. Choosing sides isn't easy. Especially when your former friends are even more ruthless than the aliens you were trained to fight!

Pilgrim Stars was delayed for several months and finally hit stores without new cover art and alongside nonsensical advertising copy. Read more about the history of Pilgrim Stars and its ill-fated sequel Pilgrim Truth in this article.