Chain of Command is the sixth episode of Wing Commander Academy aired and the seventh produced. 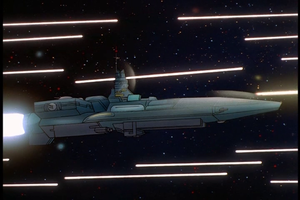 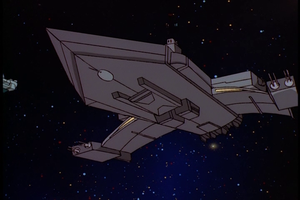 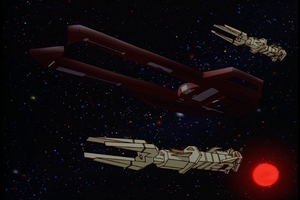 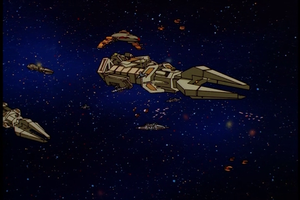 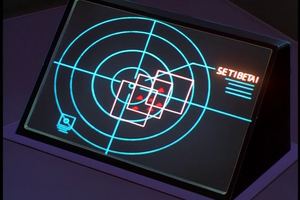 Tolwyn: You've covered standard Kilrathi jump node tactics in class. First, scout ships come through followed by a larger reconnaissance force. Only then do they commit their fleet's main body. We'll destroy the Kilrathi scouts as they come out of the node before they can report. We can't let them know they're up against one lone carrier. I asked for reinforcements from fleet command weeks ago. There's too much Kilrathi activity in this sector. They're up to something, I can smell it.

Maverick: Sir, why was I ordered to remain onboard? I'd rather be out there with my squadron.

Tolwyn: We don't always get what we want, cadet. You're here to learn what it means to command.

Maverick: Shouldn't a leader share the dangers of the people under his command, sir?

Tolwyn: Any fool can be brave. The hard thing is to be right. War doesn't forgive mistakes, Mr. Blair. Scout ships, just as I expected. All fighters, power up and attack.

Maniac: Thank you very much. Afterburners on my mark, now.

Archer: Looks like a corvette and two heavy fighters.

Maniac: I'm getting scanned. They've seen us and they're running for home. (laugh) Must have heard I was here.

Archer: Maniac, we're going for the corvette. Cover us.

Archer: Can't let them get to the jump node. Concentrate on the engine ports. I got his engines!

Hyena: Aw man, did you see that shot? I should do this for a living.

Archer: Can the chatter. Today it was the Kilrathi, next time it could be one of us.

Hyena: Man, what got your flight suit in a wad? We've got flashes coming from the jump node, more bogies coming through.

Tolwyn: Oh, the recon force shouldn't have jumped through so soon. It's not how the Kilrathi do it. Order all fighters to attack, immediately.

Archer: Looks like heavies, I think one's a carrier. And escorts.

Maniac: Hey Archer, you guys hit the carrier's laser turrets. I'll fly through the hangar deck and blast the guts out of it.

Archer: When are you going to grow up?

Maniac: I can do it. I ran it in the simulator in tactics class.

Archer: This isn't a simulation. Understood. Maniac, I just got orders from Tolwyn, abort the attack.

Maniac: Aw, no, that catbox was mine.

Archer: You mean it's ours. They're Confederation.

Tolwyn: I used to. A long time ago.

Tolwyn: Welcome aboard the Tiger's Claw.

Bergstrom: Our bet, when we were cadets at the Academy. Who would make Admiral first.

Tolwyn: yes. (laughs) We were young, so ambitious. (clears throat) Congratulations on your promotion.

Tolwyn: I'm sorry Admiral, but you're wrong. Letting the Kilrathi through the node and using the Tiger's Claw to lure them into an ambush is...

Bergstrom: A calculated risk. Our two carriers have a combined strike group of nearly 140 fighters. That ought to be enough.

Tolwyn: For what? We'd be retreating into an unsecured system. For all we know half the Kilrathi fleet could be out there waiting for us.

Bergstrom: (scoffs) The Kilrathi won't commit major units to this sector. That's why you were sent here, Tolwyn, to babysit a bunch of wet nosed cadets. There's nothing in this sector the Confederation can't afford to lose.

Tolwyn: The last time we met you still called me Geoffrey.

Bergstrom: You said it before, we were young then. You have my orders, now carry them out.

Bergstrom: Cadet Blair, I understand you lead the recon through the jump node that discovered the Kilrathi fleet.

Bergstrom: We'll talk in my shuttle.

Maverick: Cadets aren't supposed to have opinions of commodores.

Bergstrom: Very proper, but let me tell you mine. Geoffrey Tolwyn is always competent and often brilliant. But fleet command doesn't rust him. Our forces have to act as a team but Tolwyn is fighting his own war.

Maverick: Why are you telling me this, Admiral?

Bergstrom: I don't trust him, either. I want you to report to me if Tolwyn fails to carry about my orders.

Maverick: Admiral. you're asking me to spy on my commanding officer?

Bergstrom: I'm not asking you to spy on him, I'm ordering you to.

Bergstrom: I've ordered Tolwyn to lure the Kilrathi fleet into an ambush at Seti Beta I, this system's first planet. If he fails to execute that order you are to inform me immediately.

Maverick: What will you do then?

Bergstrom: I shall relieve Commodore Tolwyn of his command.

Tolwyn: We're on our own again, which means we don't have to worry about the rest of the navy getting in our way. Your orders are to seek and destroy the Kilrathi recon ships as they come through the node.

Tolwyn: I'm putting you in command of the fighters at the node. Any questions?

Maniac: Glad you could make the party this time, Maverick. Uhm, yo. (laughs) Ah, Maverick. Hey, you reading me?

Tolwyn: You were ordered to power down.

Maverick: I've also been ordered to report to Admiral Bergstrom if you fail to carry out her orders.

Tolwyn: Why, you disloyal little...

Maverick: She gave me a direct order. I had no choice. She intends to remove you from command.

Tolwyn: Patch me through to the fighters. You will attack the Kilrathi as they emerge from the jump node. Fall back to the Tiger's Claw, we'll draw the Kilrathi after us, into Admiral Bergstrom's ambush. And if she's wrong...

Maverick: I'm getting a data link from the sensor probe near the jump node. Two destroyers, two corvettes and four, no wait a minute five fighters.

Gharal: Commander, we have detected multiple energy surges. They appear to be Confederation fighters powering up.

Maniac: That lead Grikath's mine.

Maverick: Maniac, stay on my wing. We've got to clear a path for the Broadswords.

Maniac: Oh, no problem, one express lane coming up.

Archer: Okay, Pitchfork, the fighters are busy. Let them have it.

Pitchfork: I've got a target lock. Torpedoes away!

Hyena: No, they got Pitchfork!

Archer: There's nothing you can do, get out of there.

Hyena: We're getting out of here if I've got to get out and push.

Gharal: Gharal to all ships. I am assuming command. Target that bomber.

Gharal: Why withdraw when they have the advantage? Do not pursue. Follow them, carefully. They could be trying to set a trap.

Tolwyn: You all did good work today. It's unfortunate that during the action, Cadet Patel was lost. I'm sure you're all looking forward to an chance to avenge him.

Tolwyn: You'll get that chance, soon. When the Kilrathi main fleet enters the system, they will no doubt take the bait and pursue the Tiger's Claw. We will lead them to the planet Seti Beta I where Admiral Bergstrom's task force will ambush and destroy the Kilrathi. Oh, one last thing: Cadet Blair is confined to quarters until further notice.

Hyena: What landed you in the doghouse?

Archer: The old man can't blame you for what happened to Ved. You were only following orders.

Thrakhath: Enter and report. What is the status of the Terran carrier?

Gharal: It is retreating, your highness. We are tracking it with long range fighters. When our own carriers arrive we shall destroy the Terrans.

Thrakhath: The carriers will not be coming through the jump node, Gharal. I have brought only my flagship and her escorts.

Gharal: Highness, the Terrans might be trying to lure us into a trap. Intelligence suspects there might be a larger Terran force in the system.

Thrakhath: There will be a trap, Commander, but it will not be the Terrans who spring it. I, too, have a fleet hidden in this system. We will crush all the Terrans between us.

Maverick: We're approaching Seti Beta I, the planet where Admiral Bergstrom is waiting to ambush the Kilrathi. The Kilrathi fighters are tracking us. Huh. More Kilrathi ships came through the node, but looks like only part of their fleet. You know, dad, it seems Admiral Bergstrom was right... and Commodore Tolwyn, he was wrong.

Tolwyn: (sighs) I want all the cadet pilots in the briefing room in one hour. And that includes Cadet Blair.

Nelson: Commodore. Message from Admiral Bergstrom. They're under attack.

Tolwyn: Pipe it into the briefing room.

Maniac: Man, they couldn't of gotten past us.

Nelson: Message terminated at the source.

Tolwyn: Understood. Prepare all fighters for launch. All hands to battle stations. Proceed immediately to the Trafalgar and render whatever assistance you can. Cadet Blair will be in command.

Maverick: Multiple contacts. Looks like Confederation fighters with lots of Kilrathi in pursuit.

Archer: Maverick, can you read the Trafalgar? Or any of our ships?

Maverick: Negative, it's just those fighters. Save those lifepods.

Hyena: For you, Pitchfork, for you. (screams)

Grunt: We need you man, we need you.

Archer: They'll be back, and with lots of friends.

Maverick: Trafalgar escape pod, this is Maverick from the Tiger's Claw. I have you in tow. Any more survivors?

Bergstrom: They're all gone. All of them.

Maverick: Maverick to all fighters, save as many life pods as you can. Let's get back to the Tiger's Claw.

Bergstrom: They're going to find us, aren't they? Oh God, you were right, I should have listened. Now we're finished. They'll catch us and finish us off.

Tolwyn: No, we're going to jump through the node at full speed without slowing to correct our approach. They won't be able to stop us.

Bergstrom: Where will it take us, Geoffrey?

Tolwyn: Does it matter? We're running for our lives now.

Nelson: All fighters aboard, sir. The sensors report the Kilrathi fleet at Seti Beta I is moving towards our position at high speed.

Tolwyn: Well we're not going to be here. All ahead full, make for the jump node.

Thrakhath: He's trying to run the blockade. Position us over the jump node. Order all ships to open fire.

Maverick: Sir, should we launch fighters to clear the way?

Tolwyn: No, we won't have time to get them back aboard and I won't leave them behind.

Nelson: Shields failing. We'll have to divert power from the engines to keep them up.

Tolwyn: Negative, head straight for that dreadnought. We'll see how eager Prince Thrakhath is to meet his ancestors.

Crewman: The Terrans are on a collision course, your highness.

Gharl: They are brave, these Terrans.

Tolwyn: Sometimes I wish I were just a pilot again, and the only life I was responsible for was my own.

Maverick: And your wingman's, sir.

Tolwyn: You understand, Blair, that if Admiral Bergstrom had stuck with my plan and not tried to lure the Kilrathi into a trap that second fleet could never have ambushed us.

Maverick: With all due respect, sir, no one knew the second Kilrathi fleet was in that system.

Tolwyn: Someday, if you live long enough, you'll learn that when you give an order you never know what the outcome will be. How many lives will be lost. Every decision you make is a link in a chain and all you can do is hope you've made the right decision. But either way, you carry the weight of it, alone.

Maverick: Uh, sir. At the jump node, how did you know the Kilrathi would get out of the way?