The Last One Left

The Last One Left is the second episode of Wing Commander Academy. 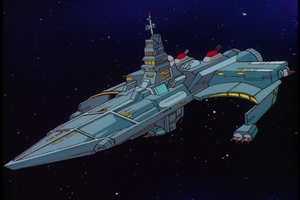 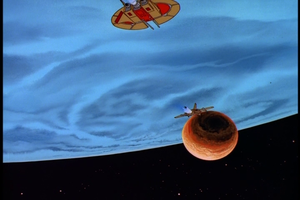 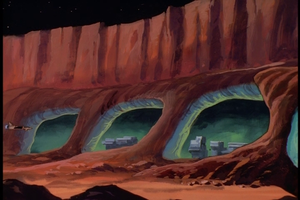 Maverick: I'm recording this message as the Tiger's Claw moves through jumpspace. So I won't be able to send it until we're out of here. We're moving faster than the speed of light, dad. So fast that to the rest of the universe we don't even exist. We're completely cut off. Completely alone. Just thinking about it I feel a... a deep sense of wonder, of awe. And maybe it's a little frightening too. I think most of the other cadets feel like I do about being out here in space but not all of them show it.

Maniac: Good return Archer, but try to get a racket off this. (grunt)

Archer: Yeah it wouldn't hurt you to practice every now and then. Or does everything have to come easy for you?

Maniac: Hey, if you can't do it right the first time, why bother?

Maniac: I've got my own shorcut, Maverick.

Maverick: This is the quickest way to the briefing room.

Maniac: You wouldn't know up from down if it weren't for gravity. We'll ust see who gets to the briefing room first.

Maverick: Okay, Maniac, you're on.

Maverick: Sorry, I didn't know anyone was coming around the corner. Here. I was just on my way to... uh, to the briefing room.

McEaddens: Back the way you came, turn left at the next corridor, even you can't miss it.

Maverick: Looks like we have to call this one a draw.

Maniac: At least we're the first ones here.

Tolwyn: Blair, Marshall. Good of you to join us. At last.

Tolwyn: I used to get lost myself my first few weeks on a carrier. But see that you learn your way around.

Maniac: I, I wasn't lost sir. I was, uh, I was unavoidably detained.

Maverick: I was organizing a search party for Cadet Marshall, sir.

Tolwyn: Yes, I see. Well, now that we're all here (clears throat) we can begin. As you see M421A is not an impressive system, but its proximity to more well traveled jump routes give it some strategic importance. Your mission is reconnaissance, turning over rocks. You'll divide into three flights of two fighters each. I want each pla net and its moons checked out thoroughly. This is an uninhabited system. There's been no Confederation activity since the initial survey just before the war. I don't anticipate any excitement, but stay alert. Any questions?

Tolwyn: Yes it is.

Payback: Friend of yours?

Maniac: Damon Karnes was the best pilot that ever flew for the Confederation.

Maverick: I've heard of Karnes. Didn't he disappear in space about ten years ago?

Tolwyn: Look, this isn't a history lesson, get moving.

Maniac: (sigh) Autonav engaged. Some hotshot pilots, we might as well take the bus.

Maverick: Unidentified ship coming in. Shut down your systems, we'll blend into the background. I've got target lock. A Kilrathi transport!

Maniac: All right! Let's take it out.

Maverick: Negative. You must have been asleep in tactics class, we slip into his particle trail and follow him. That transport might lead us to a Kilrathi base or a fleet.

Maniac: Yeah, well, there better be a whole fleet of transports.

Maniac: Oh, I knew it! We waited too long, now its picked up a fighter escort. Oh, that's the last time I ever listen to you.

Maverick: Wait, the transport's changing course. It's trying to evade the fighters. It's under attack.

Maniac: What do you mean under attack? I wish somebody 'd tell me what's going on here. Oh, I had to ask!

Maniac: I still got a lock, it's no good.

Maniac: Negative Maverick, get back to the 'Claw. This is just great! Alright jerk, what are you waiting for? Get it over with. Maverick!

Karnes: Surrender immediately or be destroyed.

Maniac: Tell him to blow it out his afterburners, Mav.

Dral: Welcome to Tortuga. Believe me, you won't like it.

Maniac: Oh, I don't know... it seems like a nice place you've got here.

Dral: This is not my place. It belongs to him.

Maniac: I mean, I had a holovid about Karnes when I was a kid, The Last Hero. I, I must have watched it about a hundred times.

Karnes: Propaganda. That vid was made by the Confederation to persuade gullible children to become pilots. Apparently it worked.

Karnes: One day I realized I no longer cared who won the war. I had no hatred for the Kilrathi and no love for the Confederation. I had no feelings at all. Space has that effect on some people. When you look too long into emptiness, the emptiness gets inside you. So one day I went out on patrol and I just kept going. Eventually I found others like myself. Humans, Kilrathi, renegades, outcasts. Now, we take what we need to survive from all sides. You disapprove?

Maverick: Is that why you keep us alive? You want our approval?

Karnes: I let you live because I'm bored.

Maverick: I believe a person's life should serve a purpose.

Karnes: There are two kinds in the galaxy, only two. Those who fly in order to get somewhere and those who love to fly.

Maverick: Tolwyn could send out search parties for a thousand years and still not find this place, it's too well hidden.

Maniac: If you'd have let me take out that transport when we first spotted it none of this would've happened.

Maniac: He was out here for twenty years. You don't know the things he's seen. The things he had to do.

Maverick: He wasn't strong enough to take it.

Maniac: You don't have the right to judge him!

Maverick: Give me that! You should've studied your unarmed combat manual.

Maniac: (screams) Give me.

Karnes: That's enough. Sensors have detected another transport. We're going to take it.

Maniac: Ever since I was a little boy, I wanted to fly with you.

Karnes: What about you?

Maverick: Is it a Kilrathi ship, or Terran?

Karnes: Does it matter to you?

Karnes: Then come with me.

Dral: The Confederation coward is running. I knew he couldn't be trusted.

Karnes: He's no coward, he's going back to Tortuga. Continue the attack. I'll deal with Maniac.

Maniac: Come on, you piece of junk. (screams) You were the best, Karnes. That should've been enough. What? Hey!

Karnes: Your long range communications and weapons don't work. It's been a long time since I trusted anyone.

Karnes: You should've joined us. You're the first pilot in a long time good enough to stay on my tail.

Karnes: I know, I was like your friend, Maverick.

Maniac: No way, he'd never turn his back on the Confederation like you did.

Karnes: You think you know him. But people change. They have to. War isn't a game for children.

Karnes: What is it, Dral?

Dral: It's a trap. The transport was bait to lure us into the open... there are too many of them. We're being taken over...

Maniac: It's over Karnes. The world you built is falling apart.

Karnes: Perhaps. But every soldier must fight his last battle.

Maniac: Oh! Maverick always said I should study the tech manuals more. I hate it when he's right.

Karnes: The whole universe to fight.

Soldier #1: My Lord, this is the last one left. We found him locked in a cell.

Thrakhath: Why were you locked up, Terran?

Thrakhath: (laughs) Vermin. I am Thrakhath nar Kiranka, Prince of Kilrah, the Fang of Sivar, Destroyer of Worlds. You renegades attacked Kilrathi ships. For that offensive I have destroyed you to the last man. But you will be left alive. You will tell what happened here so the galaxy may be warned: to attack the Kilrathi is to die.

Maniac: Must have been some party. I'm glad I missed it. You know I was lying to Karnes, didn't you?

Maverick: I hoped you were. If I can get mine started, we'll take a look at the heap you're flying. Sounds like you need a tune up.

Maniac: Hey, what do you mean heap? That heap can out fly you any day.

Tolwyn: It seems the Kilrathi task force has jumped out of the system. Probably its only purpose was to destroy the renegades. This whole Damon Karnes affair was classified top secret by the Confederation years ago. You're never to mention Karnes again. Not even to the other cadets.

Maniac: You mean the Confederation knew what he'd become? They knew he was a renegade?

Tolwyn: They knew. They thought the truth about Karnes would be bad for morale. People need heroes.