Walking Wounded is the ninth episode of Wing Commander Academy aired and the eleventh produced. 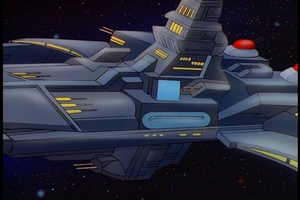 Edge of the Sector 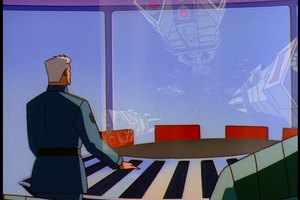 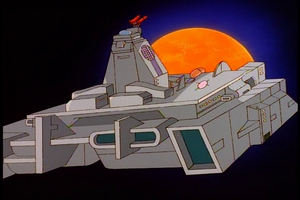 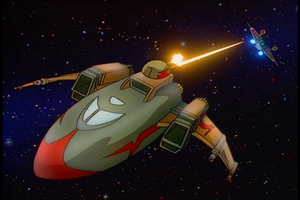 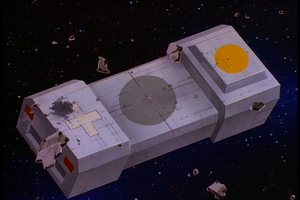 Archer: Come on, come on, I know you're hiding in here. There you are. Okay, lock up baby, come on. Yes! I've got missile lock. Missile lock confirmed. Bingo. Woo-hoo!

Guthrig: Give us a minute, ensign.

Archer: I nailed 'em that time.

Guthrig: According to the simulator printout you hesitated. Why?

Archer: I had to make sure of the missile lock. It only took two seconds.

Guthrig: Actually, 1.93 seconds. Enoguh time for the Kilrathi to have eliminated you or your wingman.

Archer: You're going to ding me over two lousy seconds?

Guthrig: We have to run more simulations. I'm sorry, but until then I have to ground you.

Guthrig: In my opinion, you're a liability in combat.

Archer: What do you know about combat?

Blizzard: I want you to have this.

Archer: You know I can't accept this, Blizzard. Alan, it's Archer... it's Gwen. You've got to turn back.

Maniac: So what's this crud about you beign grounded?

Archer: Won't you come in?

Maniac: Don't get cute, Archer, I saw the duty roster. Now what gives.

Maniac: Guthrig? The doctor who needs a doctor?

Archer: He's not so crazy. Hey!

Maniac: This thing about you blaming yourself for what happened to Blizzard has gone too far. It's time to let it go.

Maniac: You're a good pilot. Not as good as me but hey, who is. Look, you've got to move on.

Archer: It's not that easy.

Maniac: You make it easy. That's how I do it.

Archer: What do you care all of a sudden?

Tolwyn: All duty pilots report to the briefing room immediately.

Tolwyn: Gentlemen, we have received a distress call from the hospital ship Plekiu. She was part of a convoy that was jumped by a Kilathi advance force at the edge of this sector. That means the Pleiku is wihtin range of our fighters. Cadet Blair will lead this sortie. The mission: to lend close support to the hospital ship and to escort her to the Tiger's Claw. And be wary of Kilrathi traps.

Maverick: Alright guys, keep your eyes on your sensors, this is the last reported position of the Pleiku.

Maniac: You'd think we'd be seeing signs of a battle by now.

Maverick: Maybe this battle's over.

Maverick: Me too. It's not a fighter, either.

Maniac: Confirm that, a hospital ship, we got it.

Grunt: Gatos don't leave much, do they.

Maniac: Maverick, I'm picking up life signs. There are \people alive in there.

Maverick: Okay, let's see if we can talk to them. Hospital ship Pleiku, this is Chris Blair from the Tiger's Claw, do you read? Come in, Pleiku, do you read?

Maniac: Look at that, there's nothing left of the bridge.

Maverick: Comm systems are out too, we're getting no answer. Hang on. I'm picking up another ship.

Hyena: One of ours?

Maverick: Too far away to get a recognition signal Better check it out.

Maniac: What about the hospital ship, we can't just leave them. The Kilrathi might come back to finish the job.

Maniac: Hey, woah, hey, time out. I wasn't volunteering. I go where the action is. I'm your best pilot.

Maverick: Yeah, and I'm lead on this pilot. You stay put right here.

Force Commander: The Terrans have taken the bait. As soon as they're in range launch our little surprise and inform the Nir'Runihn to destroy the hospital ship. (laughs) It has served its purpose.

Maverick: Getting a recognition symbol. It's Confederation, fighter transport Morgan.

Maverick: Transport ship Morgan, we are here to assist.

Grunt: Maybe it's a welcoming committee?

Maverick: Some welcoming committee, they're leaving. Kilrathi! It's a trap!

Maverick: They're on us! Break right, Hyena

Hyena: Sorry, Maverick. Got my own problems - three of 'em!

Maniac: Aw, man, they need me. What am I doing babystiting this floating hulk? Orders or no orders, I'm going. Hey, what? I'm targeted! Where is he? Burning tailpipie!

Captain: Incompetent! Surprise should have made him ours.

Captain: Or you are very slow. Lock onto him and finish him.

Officer: But captain, we have only one missile left after our last attack on the hospital ship. Shouldn't wee...

Captain: Don't question my orders, I want that Terran fighter.

Maniac: Okay, now you've made the Maniac mad. Woah! Okay. You've got guns? Well so do I. Woo hoo!

Captain: Get him back in the missile sites.

Maniac: Now to finish you off. What? Hey! Missile lock!

Grunt: Make your peace, Gato. That's the last one, Maverick.

Maverick: No. There's one more to take care of. He's not going anywhere. But we are, those fighters were headed for the 'Claw.

Hyena: What about Maniac?

Maverick: He'll... just have to fend for himself.

Maniac: Maniac to hospital ship Pleiku, I am docking alongside. Look, uh, look I'm one of the good guys, don't shoot. I hope they heard that.

Patient: Look, it's a pilot!

Patient: Are you here to rescue us?

Kyle: Hope you're not wounded, 'cause I got no more room.

Kyle: I'm Doctor Kyle. Welcome to my home away from home. We're a little crowded and I could use some more antibiotics, but we manage. Are you our rescue?

Kyle: Oh, good. Well, I can always use a hand in triage.

Maniac: I haven't had any med training doc.That's okay, neither has half of what's left of my staff.

Kyle: These are our toughest cases, the ones that need the most attention.

Blu: Doctor, I need you.

Kyle: Afraid of the sight of blood?

Kyle: Okay pilot, come over here. I'm going to to need your help.

Kyle: Too late, the war took care of that. With the main power out we've had to learn medicine the old fashioned way. You have to work the lung pump manually until the patient can breathe on his own. I have to operate on another kid and I need my nurses. Right now, you're this boy's lungs.

Tolwyn: Contact that flight. Let's bring them in. They've earned it.

Maverick: Maverick to Tiger's Claw, do you copy? They're jamming us, the Claw doesn't know it but they're aobut to get ambushed.

Nelson: The ships are the source.

Tolwyn: It's a trap!

Tolwyn: Battle stations, all pilots to flight deck. This is not a drill.

Archer: You're doing this, Bowman.

Maniac: But he's making this noice...

Kyle: That's 'cause he's bleeding. You can take the pump away, nurse.

Kyle: You saved his life. What was that?

Nelson: Shields down to 40%, sir. We're losing fighters on takeoff.

Tolwyn: We're running out of time. Mr. Nelson, you have the con.

Nelson: But... where are you going, sir?

Tolwyn: One of Napoleon's generals said it best: ride to the sound of the guns.

Payback: What do you think you're doing?

Archer: Same thing you are.

Payback: Do me a favor and stay off my wing.

Hyena: My sensors are picking up one big battle ahead.

Maverick: They started without us. We'll be there in 90 seconds.

Grunt: Let's hope the 'Claw's in one piece when we get there.

Maniac: The Kilrathi'll most likely board near the bridge and then move in from there. Uh, what's the situation with the ship.

Kyle: Well there's nothing between us and them but a few airtight doors.

Maniac: The furballs will kick 'em open. If the decompression doesn't get us then their lasers will. Well at least we'll go fast.

Kyle: The med-bay's a standalone compartment. We can seal it from the rest of the ship. We can all crowd in there.

Maniac: Yeah, yeah! Yeah, good. Maybe we can give the cats a taste of their own medicing. I'll need a volunteer.

Kyle: Oh pick me, pick me. That's how I wound up here in the first place.

Officer: Find the Terrans, I want them all exterminated.

Maniac: This better work, Maniac, you've only got one shot. You ready, doc? (sighs) Let's do it. (sighs) Here goes nothing.

Officer: What is this?

Maniac: You guys can fly with me anytime.

Payback: Nice of you guys to get in the fight.

Tolwyn: No cadet, I'm on your wing.

Archer: Just a walk in the park, Archer. Ahh!

Payback: That's how you do it, Archer.

Archer: I had him in my sights.

Tolwyn: This is Tolwyn, I can't shake this beastly furball off my tail.

Payback: So am I.

Archer: You don't trust me, do you? I'm two seconds from being in position.

Payback: I can take him out.

Payback: I knew it, she won't engage!

Payback: Missile lock! On its way!

Archer: Not this time. Not the 'Claw.

Archer: Hey, look who's back.

Maniac: I heard you saved the ship.

Archer: I did my job. You were right, I had to move on. I guess.

Archer: I'll send it to his family. I won't be needing it.

Tolwyn: Ah, come in, cadets. I'll make it brief. I'm recommending you both for the flying corss. Two ships were saved because of you. It's an honor well deserved.

Maniac: Uh, sir, I'd like to recommend my medal be given to someone else. The doctor and the nurses on that hospital ship. They were the real heroes.

Archer: I didn't say a thing.

Maniac: Uh, hey, how bout a game of racquetball?

Archer: Any time, Maniac. I've got your number.

Maniac: Yeah, but not my backhand.