Recreation is the eighth episode of Wing Commander Academy aired and the ninth produced. 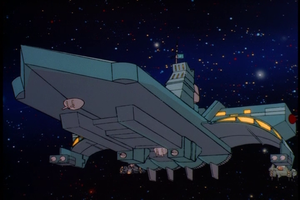 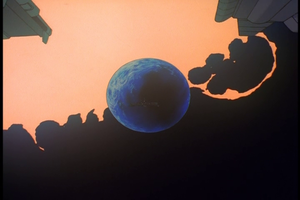 Payback: Furballs at six o'clock. Two fighters and a salvage tug. And something under tow.

Payback: Maniac, Archer, take out those fighters. I'll try to slow down the big cat.

Maniac: Can do! Woo-hoo! I've got this one. Me and this guy are going to play a little tag. Nice move, furball. Alright it looks like I'm it.

Archer: Hang on, Maniac, I got a target lock. I got him.

Maniac: Come on, Archer, take him out. He's all over me! He's got a target lock.

Archer: Maniac! I had to do it. There was no other way.

Payback: Come on, one clear shot. (groans) Just one.

Maniac: What a piece of junk.

Payback: Maybe, but that Kilrathi salvage tug might have been able to escape if he'd cut it loose. It must be important.

Archer: I wonder what's inside.

Payback: Whatever it is, we'd better get it back to the 'Claw.

Tolwyn: It definitely isn't Kilrathi. It isn't like anything that's been flown in the last two hundred years.

Maya: I don't care much for their interior decorator. What a mess. Looks like somebody's home after all. You want me to figure out the deep freeze system and bring this cold cut back to life?

Guthrig: He appears human. It's possible he actually is hum an.

Tolwyn: From the look of this ship, he's been in cryo freeze for a long time. He can wait a little while until we get him to a qualified specialist. Seal the ship until we can arrange to pass him on to Confederation Scientific Operations.

Tolwyn: We'll rendezvous with a squadron of escort frigates who will take these transports off our hands. We'll be meeting them here at a planet called Oasis.

Tolwyn: Most old spacehands consider Oasis among the most beautiful planets in the galaxy. There will be shore leave while we wait for the escorts, so you cadets will get to judge for yourselves. Oasis is something of an engmia. Its proximity to its sun should make it barely able to support life. But an unusual energy field filters out harmful radiation, much as Earth's ozone layer blocks out ultraviolet light.

Tolwyn: The Oasians have an agreement with the Kilrathi recognizing Oasis as a peace zone. No fighting. The Confederation respects that agreement. So far, no Kilrathi have visited Oasis while a Confederation ship was there. But one should always be prepared for the unexpected.

Warrior King: Stand aside and you will not be harmed. I warned him not to interfere! I need one of your craft.

Maniac: Nobody flies my fighter but ME!

Warrior King: Don't. I have searched through more lifetimes than you can imagine. I will not let you stop me when I am this close. (groans) What is one life against a world?

Oasian Elder: Once our world was a barren place. A furnace fired by the sun's anger. We were born in that furnace, hard and cruel as a forged blade. Then, the Maker fell from the sky and our world was recreated. The hot wind became a cool breeze, rains fell, the lad turned green with new life. Our lives were no longer filled with the fight to survive. We gave up hatred and war and celebrated the gift of life our world had been given. We share that gift with you.

Oasian Elder: Welcome to a world at peace. May our peace be yours.

Maniac: Man it's like Dioscuri 2 where they thought we were evil spirits that dropped out of the sky

Archer: Maybe that's what we are, evil spirits.

Maya: Had enough of paradise have you?

Maverick: I keep thinking about the legend the elder told us. About the Maker falling from the sky.

Maya: So? It's a legend, a story to explain things they don't understand.

Maverick: What if it isn't? What if the energy that changed this planet isn't a natural force?

Maya: Don't you ever relax, Maverick? It's beautiful here. It could be perfect, if you stay.

Maverick: (sighs) Maybe. And believe me, I, I really wish I could stop thinking about that alien. But there's something about him that... I don't know, bugs me. I've got to try and talk to him.

Maniac: Well it figures paradise would have two moons. (laughs) If that's not enough to make you feel romantic, you need help. (laughs) (sighs) Need any help?

Archer: Any world could be paradise if we could learn to live without destroying each other. Every time you take out a Kilrathi a piece of yourself goes with him. A part of your humanity.

Maniac: Then why's there's so much of me left?

Archer: You can be a real jerk sometimes. Doesn't what we have to do ever bother you?

Maniac: Thinking about it would just slow me down, throw me off my game.

Archer: Is that all it is? A game? Who's the best?

Archer: I feel sorry for you.

Maniac: Hey, I, I don't want your sympathy, I came out here to help you. Kilrathi!

Tolwyn: It's Kilrathi alright, a carrier. Scramble all available fighters.

Communications Tech: Sir, we're getting a signal, from the Kilrathi.

Tolwyn: Put it on the screen.

Drak: Terran vessel, I am Drak nar Kulrag, commander of the Imperial carrier Naukeric. Do not fear, Terran apes, we will not destroy you... today. We are only here for recreation. We will respect the peace zone. The Kilrahti keep their word, can you?

Oasian Elder: We were burn in that furnace, as hard and as cruel as a forged blade.

Maniac: Oh man, I don't like this. Not one bit.

Archer: Grunt's keeping the rest of the crew near the ships in case the Kilrathi try anything.

Maniac: Oh good, where's he going? The litter box? I'm going to see what he's up to.

Maniac: Uh, nice night for a walk. Mind if I tag along?

Drak: Out of my way, Terran, we are here for recreation, not fighting.

Maniac: Hey, going hand to paw with you furballs is my idea of a good time.

Maniac: You got a point there. (groans)

Drak: (growls) Let us stop playing games. You are here for the sphere. But you will not get it. It will be ours before this planet's dawn. (groans)

Archer: We aren't supposed to carry weapons down here.

Maya: I never go anywhere without it.

Guthrig: His ship is more than two centuries out of date and his weapon apparently drew its power from the alien himself. When he flew, I believe he was levitating using psychokinetic energy.

Maverick: Can I talk to him?

Guthrig: You can try. He hasn't spoken since leaving the flight deck.

Maverick: This is cadet Christopher Blair. Blair. Earlier you said you knew me.

Warrior King: I knew a soldier long ago on a place called Earth. His name was Blair.

Maverick: There have been a lot of soldiers in my family. Do you have a family?

Warrior King: It was so long ago. I try not to remember.

Maverick: You said something about a search. What are you seeking? Is it the Maker?

Warrior King: The Maker? Does it rule storm and wind, drought and rain?

Warrior King: I have found it. The Orb, at last.

Maverick: Hey, what happened? Get away from that door! (groans)

Warrior King: You fight well. You will take me to the surface of the planet or there will be one less soldier in your family.

Maverick: What is the Maker, exactly?

Warrior King: It is the Orb. A powerful weapon.

Maverick: The galaxy is full of weapons.

Warrior King: It is more. The power of annihilation and creation. And recreation.

Maverick: what do you want to recreate?

Warrior King: Long ago, my planet was destroyed. The orb is the only chance to restore it.

Maverick: Can it bring back the lives that were lost?

Warrior King: No, but to make the planet whole again... maybe there is a chance.

Maverick: What destroyed your planet?

Warrior King: This is a powerful ship. There were none like it when I began my search.

Maverick: Was it war? Two great nations struggling? Or was it a warlord, a tyrant?

Warrior King: No, not a tyrant. I wanted to end the fighting, the chaos. I tried to save my world and instead it is my fault it was destroyed. I was responsible. Now I must set things right.

Archer: Yes sir, I understand. The alien's escaped. With Maverick as hostage.

Maya: The old man'll get him back, won't he?

Archer: Tolwyn says he can't spare any fighters for a rescue. Not with that Kilrathi carrier up there.

Maniac: So why don't we go after him?

Archer: We've been ordered to escort the shuttle back to the Tiger's Claw.

Archer: Can you get the shuttle back to the 'Claw by yourself?

Drak: Prepare for takeoff. We must reach the sphere before the Terrans.

Warrior King: It is there. After all these years, a new beginning.

Maverick: Don't you know what will happen to this planet without the Orb to protect it?

Warrior King: I am fighting for my world. (gasps) No!

Archer: Come on, Maverick, get aboard!

Warrior King: There is no peace. The fighting never ends. Never.

Maniac: Woo hoo! Uh, oh! Come on, fire up you heap, or you're spare parts.

Drak: Foolish Terrans. There can be no peace between us, even on Oasis. When our enemies are destroyed, that is peace. This is Drak! Emergency! Send more fighters! The Terrans have the Sphere! Wait, no!

Maverick: That sphere, it's the Maker! We can't let him take it.

Warrior King: I was right to seek you for so long.

Archer: We can't let you take the Maker.

Warrior King: Do not force me to destroy you.

Archer: Look at that sun. If you take the Maker, this place, this paradise will be a barren rock again. The power to create is greater than the power to destroy. We have plenty of weapons but nothing that can create the beauty of this world.

Warrior King: But the Orb can bring life back to my planet.

Maverick: What about the Oasians? You can't destroy one world to create another. You can't buy it back with innocent lives.

Warrior King: I have fought for so long I forgot what I was fighting for. One world has been destroyed. It must not happen again. (screams) Take care that you do not forget why you fight.

Maniac: Where does he think he's going?