Word of Honor is the fourth episode of Wing Commander Academy aired and the fifth produced. 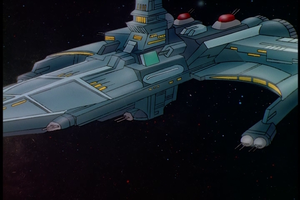 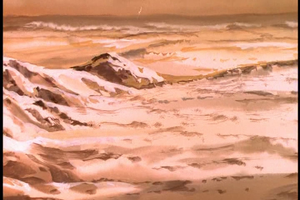 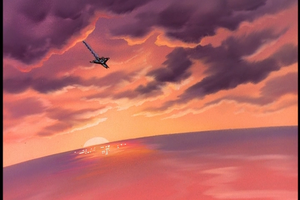 Sarge: Incoming! In the trench now, take cover. The first dumbg runt who gets his head blown off is going to have to answer to me.

Grunt: How long are those furballs going to keep us waiting.

Sarge: Ah, get ready, Paz, they'll be coming soon. The guns have stopped.

Grunt: Eh, I've got ears. And something else for those gatos.

Grunt: Feel it? The ground's shaking. They're coming through the snow!

Sarge: There's too many of them. Fall back to the next ridge. (screams)

Tolwyn: Cadet Paz. If you'd care to join the rest of us, we'd like to continue.

Grunt: Oh, uh, sorry, sir. (whistles) I was on autoglide there for a second.

Maniac: Hey, if you don't want to go on the mission I'd be happy to take your place. Even if it does mean flying wingman for Maverick.

Archer: Don't you ever get tired of being a hot dog?

Maniac: Hey, you are what you eat.

Tolwyn: You have something to add to this discussion, cadets?

Maniac: Not, not a thing.

Tolwyn: Good, then perhaps Mr. Paz could summarize this mission.

Grunt: Sir, with the Tiger's Claw at picket at the jump mode, designated alpha flight will sortie looking for the presence of Kilrathi and make a routine sweep of the planetary system, sir.

Tolwyn: Correct, with one provizo. Never call a mission routine until it's over. Dismissed.

Maverick: You know why I volunteered for the Academy? I thought flying a fighter would be the most exciting job in the galaxy. (laughs) I didn't know I'd be spending most of my time just going from one place to another. Hey, what about you, why'd you leave the marines to join the Academy?

Grunt: A warm bunk at night and three hot meals a day. Besides, I can singe the fur off more Kilrathi flying one of these then I ever could pounding the ground. Maybe someday I'll take out a Kilrathi troop transport. A thousand furballs with one torpedo.

Maverick: Hmm. Better to take out Prince Thrakhath's flagship. Get him and maybe the Kilrathi will make peace.

Grunt: You don't make peace with rabid animals. You hunt them down and destroy them. Every last one. Ah, I'm gonna grab 40. Wake me if the fur starts to fly.

Nurse: It's okay. Take it easy, Paz. The paralysis is temporary. That hard head of yours took quite a hit. It should go away, but any kind of trauma could bring it back. What you've got is a million credit wound. You're going home, Paz. Medical discharge.

Grunt: But the marines are my home.

Nurse: Not anymore. For you, this war is over.

Grunt: I'm not going to sit back and watch the Kilrathi take over the galaxy. What if I transfer out to another branch of the service, can you keep the paralysis off my record?

Grunt: Let me worry about that.

Maverick: Coming up on sunrise.

Grunt: Bandits, but I'm not getting a sensor lock. Where are they?

Maverick: Something's masking our sensors. The sun, they're coming out of the sun! Break right, break right. Stay with me, Grunt. Can't lose them this way.

Grunt: Maverick, I can't lose him.

Maverick: Grunt, can you stabilize your pod?

Grunt: i can't move. I can't reach the controls. That last Dralthi...

Maverick: Ease down. I got it. Just hang on. No sign of fighters, I got a heat trail on that last pod. He's going down.

Grunt: That's good. Cats hate water. Can you get me home, Maverick?

Maverick: Don't worry, I haven't dropped anyone yet. Ah, flame out! Total power failure. No good, can't restart. Have to try to glide in, dead stick.

Maverick: I see something. Smoke! That could mean an island. If we can just... make it...

Grunt: If I could I'd get out and push.

Maverick: This could be rough, Grunt. Hang on!

Grunt: I got a choice?

Maverick: Whew! Well, any landing you can walk away from... Are you alright?

Maverick: Come on, I'll find us a dry spot.

Grunt: You know, I think this room has bugs.

Maverick: (laughs) I'll speak to the management. Look (grunts) even if I can't get us in the air again, once we get home the medics will get you on your feet again.

Grunt: This is only... temporary.

Maverick: It's... happened before?

Grunt: There, uh, there was a marine on Repleetah who got hit, neuroparalysis like this.

Maverick: Yeah? Well, I'd better get to work and see if I can get that bird to fly again.

Maverick: (sighs) This doesn't look like it did in class. Hey, how are you doing?

Grunt: I got one arm back, you hoo.

Maverick: (laughs) I hope it's not as clumsy as mine. That Kilrathi pilot that ejected must have made it here!

Grunt: My laser rifle's in my pod, souvenir of the corps.

Krulan: Surrender Terran, there is no need to throw your life away.

Maverick: He doesn't know that there's two of us. Keep him talking.

Krulan: All I want is your fighter, Terran.

Grunt: Well is that all, hey, the piece of junk doesn't even work. It's, you know, um, busted. Come on out and let's talk about it. Hey what's the matter, furball? Cat got your tongue? Maybe you're waiting for some nice warm milk or something. (meows)

Krulan: You forgot, Terran, we Kilrathi are physically superior. (screams) Why?

Maverick: Ah, forget it. I wouldn't feed my worst enemy to one of those things.

Maverick: I'm Chris Blair, they call me Maverick. Huh. My ship will be sending a rescue party. When they get here, you can hide in the rocks, we won't tell them you're here.

Grunt: Wait a minute, this furball is the enemy. We can't just let him go.

Maverick: If we're going to survive we have to trust each other. I can't fight those things and guard a prisoner at the same time.

Krulan: If Kilrathi ships come first, I will not tell them you are here. I give you my word of honor.

Grunt: You're word of honor.

Maverick: Oh come on, Grunt, what do you say?

Grunt: I say you're making a mistake. But I'm your wingman, I'll back you up.

Maverick: Now all we've got to do is stay alive until somebody's rescue party gets here. Look, the top of the volcano is bare rock. We'll have a better chance up there. At least we'll be able to see what's coming at us. Why don't you carry him, show us some of that Kilrathi physical superiority.

Grunt: (screams) No thing cheats me out of what I want.

Grunt: I always hit what I aim at.

Krulan: They're all around us.

SCENE - Base of Volcano

Grunt: Move it, I thought cats could climb.

Krulan: Perhaps you would rather carry me.

Krulan: You were correct, Terran, they do not like the rocks.

Maverick: Yeah, we're safe. But for how long? It looks like those things are... are massing for an attack.

Krulan: Give me back my laser. If this must be my end, let me face it like a Kilrathi. A weapon in my hand, roaring my last breath in the face of my enemy.

Grunt: Don't do it, Maverick. You can't trust a Kilrathi.

Krulan: I gave my my word of honor.

Maverick: Here, when the time comes, use it well.

Grunt: No, you can't do it, Maverick!

Maverick: You stop it, Grunt. For once, we're on the same side. Maybe it's a start. And it's got to start somewhere if this war's ever going to end. We can't just keep fighting until there's no one left. Look, fighters! But are they Terran or Kilrathi?

Grunt: Where are they?

Krulan: You dishonored my clan three tiems, Terran. Once when you defeated me in battle, once when you saved my life and once again when you offered me kindness. I spit on your weakness.

Maverick: You gave your word.

Krulan: The Kilrathi do not make deals with their enemies. We destroy them.

Grunt: You should've let me use this on him when I had the chance.

Maverick: We've got to find a place to hide. He'll be back, and he won't be alone.

Krulan: There are two Terran pilots on the island. We must hunt them down.

Gharal: But there is no time, commander. Terran rescuqers will be coming. Our mission was to scout for enemy ships. We must warn Prince Thrakhath that a Terran carrier is in this system.

Krulan: You are Prince Thrakhath's pet but you have not been promoted above me yet, Gharal. I am in command and I will avenge the honor of my clan.

Gharal: The mission comes first, that is the honor of a soldier.

Krulan: Go and warn your master if you must. But the rest of us stay here until the Terrans are exterminated.

Krulan: Summon the other fighters.

Maniac: And I'm getting a Kilrathi fighter leaving the planet. Looks like he just lit his afterburners but I can catch him.

Archer: Negative, Maniac. This is a rescue mission, not a cat hunt.

Maniac: (groans) Why did Tolwyn have to put you in charge?

Archer: Because he wanted the job done. Hyena you stay with the rescue ship. Payback, you're with Maniac and me, we'll check out the situation.

Maverick: Come on, we have to keep m oving.

Kilrathi Pilot #1: I saw them.

Krulan: Stand up, Terran and I will show you the greatest mercy the Kilrathi give. A quick end to your miserable lives.

Krulan: The Kilrathi do not surrender. (groans)

Archer: Hold your fire, they're evacuating.

Maniac: They got a funny way of saying goodbye? Woo hoo!

Payback: What happened? That furball almost got away.

Archer: Yeah, he almost got away.

Maverick: It's all over, Krulan. Don't throw your life away.

Krulan: You will not dishonor me again, Terran. A Kilrathi is never afraid. You hear me? We are never afraid.

Grunt: How can we ever make peace with someone like that? If you'd been on Repleetah with the marines you'd know, the furballs are all the same.

Maverick: Humans aren't all alike. Maybe the Kilrathi aren't all like that one.

Grunt: (laughs) There aint no such thing as a good Kilrathi.