On Both Your Houses

On Both Your Houses is the tenth episode of Wing Commander Academy. 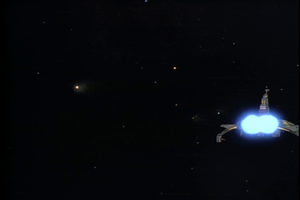 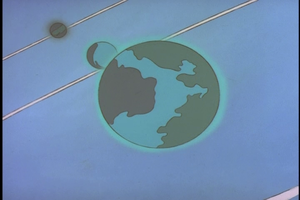 Tolwyn: Cadet Blair's group will patrol aggressively in the area of the second planet. The planet's called Greenhouse. It lacks indigenous sentient life but it's extremely rich in other plant and animal life forms. There's a Confederation bio-research station there. The station is under communications blackout to keep it secret from the Kilrathi. You'll know there has been contact if that station is no longer there.

Maverick: On final approach to Greenhouse.

Maverick: They're turning on intercept course. You're with me, Archer.

Maniac: You may be bigger, furball, but you're sure not better. Wahoo! Huh? Oh man! 'Archer: Maniac's in trouble.

Maniac: Ah! These guys are on me like fleas.

Archer: I got target lock.

Maverick: Stay with him!

Maniac: Hey Archer, what happened back there? I thought you had him locked?

Archer: I... it must have been some kind of a glitch. The missile just didn't launch.

Maverick: He's heading for the planet, trying to lose us in the storm.

Maniac: Hah, let him try. I fly even better in an atmosphere than I do in space.

Maverick: Ow! Lost him. Too much electrical interference. Archer, circle the storm. Maniac and I will go inside and flush out the cat. Keep scanning. Make sure he doestn' escape.

Archer: I, I ran a firing sequence test on my missile launcher. It won't fail again.

Maverick: It shouldn't have failed before.

Maniac: Great shot, Maverick. Almost as pretty as one of mine.

Maverick: Save it for when we're done. Let's go pick up that pilot.

Maniac: Looks like he cut loose from his chute and crash landed. (laughs) That must have used up one of his lives.

Archer: He's not transmitting a rescue signal, nothing to home in on.

Maverick: Let's try the research station, maybe they can help us.

Maverick: Sorry, we weren't sure if you'd be here or the Kilrathi.

Sing: I appreciate your concern but I don't think we have anything to fear from the Kilrathi. I'm Branwyn Sing, I'm in charge of this station.

Maniac: Uh, Todd Marshall (laughs) But they call me Maniac. Maybe you've heard of me.

Maverick: Christopher Blair, Doctor. We're on patrol from the Tiger's Claw. We got jumped by some Kilrathi fighters and one of their pilots ejected onto the surface. We'd appreciate any help you can give us in locating him.

Sing: We can do more than just help. We use these to gather specimens in the rainforest. We should be able to program them to track a Kilrathi. Why don't you relax while we do the reprogramming.

Sing: Number three, show our giests to their quarters.

Sing: (laughs) The plant got up and walked away!

Archer: What kind of research are you doing way out here?

Sing: Pharmaceutical. With the diversity of life on this planet there are probably millions of new medicines to be found.

Maniac: It must get awfully lonely. I mean just the three of you and all.

Rivera: Oh, we keep busy, Can't forget there's a war on, you know.

Archer: No, can't ever forget. I envy you, Doctor. It must be very satisfying saving lives.

Sing: We do what we can.

Maniac: Eh, you check the fighters Maniac, make sure they're allright with the storm coming on. Yeah, right, just wants me out of the way so he can make a move on...

Sing: Branwyn, please. Actually I just had to get a closer look at your ships. All we get here are supply shuttles twice a year. What kind are they?

Sing: Oh! I've always been interested in flying. It must be wonderful being a pilot.

Maniac: Well it's wonderful being the best pilot.

Sing: Then you must have the best ship.

Maniac: Well, they're all pretty much the same. I mean, you know, of course mine's the best.

Sing: Then with that Kilrathi pilot in the area maybe I should order one of my robots to guard it.

Maniac: The Kilrathi would need to know my enabling code to even warm up the engine.

Archer: No. No. No, I can't change anything.

Sing: One lap, no cheating. Ready? Go. Good morning, did you sleep well.

Archer: Like I always do. Did your robots find the Kilrathi?

Sing: No, not yet, so we're taking a swim.It's part of my morning routine to stay in shape.

Sing: They're very competitive, aren't they?

Archer: Well, boys will be boys. Especially when they're encouraged to be.

Sing: You're all little more than teenagers.

Sing: Fighting a war is a terrible way to grow up. If only there were another way to defeat the Kilrathi. Maybe someday there will be.

Archer: What do you mean?

Maverick: Oh ho ho, if Brawnwyn says it's a tie then it's a tie, she's the judge.

Archer: If Branwyn can spare you, shouldn't we go look for that Kilrathi pilot? After you dry off, of course.

Sing: No need, my robots are quite capable of capturing that Kilrathi on their own. They're desigend to handle large and uncooperative specimens. Besides, I promised Chris I'd show him our lab.

Archer: We're near the coordinates where the cat went down. I don't see a place to land.

Archer: Trajectory should've taken him this way. Dr. Sing is up ot something.

Maniac: You mean with Maverick?

Archer: With both of you. She's playing you against each other. She's making fools out of you. Not too difficult.

Archer: Grow up, Maniac. That woman is hiding something I know it.

Maniac: Yeah, you know all about hiding things don't you.

Archer: I don't know what you're talking about.

Maniac: That glitch when your missile didn't launch. You didn't fire. You want to tell me why?

Maniac: It means I'm better than he is.

Archer: We can cover more ground if we split up.

Sing: We analyze the natural compounds then test them with computer models for possible medical uses. Ironic, but we found a number of compounds that would be most effective in a species like the Kilrathi. Do you think we're wasting time researching medicines that might only benefit our enemies?

Maverick: Well they won't be our enemies forever.

Sing: I believe that, too.

Maverick: What's in that building over there?

Sing: Just storage. Chris, what you said about the Kilrathi, do you really think we can make peace with them?

Maverick: I think there's good and evil in everyone. The Kilrathi can be just as good as we can be, maybe better. Maybe better. Just like we have the potential to be like them. There isn't anything the Kilrathi have done that you can't match with Earth history.

Sing: Are there many pilots in the fleet who would agree with you?

Maverick: I doubt it. I know Commodore Tolwyn doesn't.

Sing: Maniac said I must be lonely living out here. But I htink you're the one who's lonely.

Archer: I found the ejection pod.

Archer: No sign of the cat, though. Not even a whisker.

Maverick: Archer, be careful. The pilot probably bobby trapped that pod. I'll be there as soon as I can. Maverick out.

Archer: Wait, I am not the Kilrathi! (grunts)

Archer: I don't know. But I intend to find out.

Archer: But right after I found the ejection pod I was attacked, bu one of her robots.

Sing: My robots identify specimens by molecular residue. Smell. You must have picked up some of the Kilrathi's odor at the ejection pod. The robot was confused.

Archer: No, you've already found the Kilrathi. There were robot tracks around the pod.

Sing: Yes, from the robot that attacked you.

Archer: Oh then you won't mind if I search the base.

Maverick: Uh, I've had the tour. There's nothing here.

Archer: Sure you saw everything?

Sing: I told you about the medicines, Chris. We needed a Kilrathi to continue testing.

Maniac: You mean a guinea pig.

Maverick: Why didn't you tell us?

Sing: He's a prisoner of war. I knew you'd have to take him back to your carrier. AT least wait until morning, our most important test will be done by then. You want peace with the Kilrathi, this medicine could be the bridge that leads to it. A gift of hope from the Confederation to the Kilrathi.

Maverick: Woah. I believe you want to end this war as much as I do. He he won't be harmed?

Sing: You have my word as a doctor.

Maverick: Alright, you have until morning.

Sing: I'm setting you free. THe war can't be allowed to go on. This may be the first step in ending it.

Grilg: Give me a weapon to protect myself.

Archer: I don't think so. I knew you couldn't be trusted.

Sing: You don't know anything. Attack.

Maverick: What do you think you're doing? Archer, have you lost your mind?

Sing: You're all just children. Stupid children. You think you can fight this war like little toy soldiers with rules and honor like it's a game and the high school wins? This war is biological, a competition between two species and it won't be over until one survives.

Maverick: Then why did you let the Kilrathi go.

Sing: I've infected him with a plague virus we discovered on this planet. It's deadly to the Kilrathi. That pilot will spread the virus through his fleet until it reaches Kilrah itself and then the war will be over.

Archer: The Confederation outlawed biological warfare. If the Kilrathi Empire retailates with bioweapons, millions will die. On both sides.

Maverick: It won't happen. Our fighters are the only way off the planet. The Kilrathi doesn't know the enabling codes.

Maniac: (sighs) He knows the code to mine.

Maniac: You gave it to him, didn't you?

Maverick: What? How did she get it?

Maniac: Well, she wanted to see how a fighter works.

Maniac: So I showed her!

Maverick: You can't let him get away.

Archer: Listen to me. You've been infected with a virus. Dr. Sing only let you go so you'd carry the plague back to Kilrah.

Grilg: Do you think I'm foolish enough to believe you, Terran? Your species does not know how to tell the truth.

Archer: You're just a victim of this war. Eject while you still can. Engines failing, no! I can't let you go home. It must be very satisfying... saving lives.