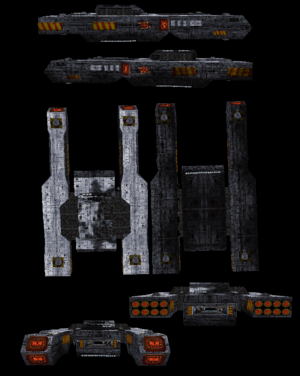 The BWS Intrepid (CV-06) was a Durango-Class Heavy Destroyer in the service of the Union of Border Worlds, and served as the flagship of the Outer Worlds Fleet.

She was nicknamed the Evil I.

The BWS Intrepid was originally the TCS Delphi, during which she was an ordinary heavy destroyer in the service of the Terran Confederation during the Terran-Kilrathi War. At some point, she was reconfigured by the Border Worlds Militia to serve as a light carrier. She was subsequently rechristened as the Intrepid.

The Intrepid had a prominent role to play during the volatile Border Worlds Conflict of 2673. Early in the crisis, her captain was Raul Dominguez, a veteran of the Terran-Kilrathi War. By this point in time, the Intrepid hosted wings which were captained by several prominent Terran war veterans who had grown sympathetic to the Union's cause.

During the crisis, a number of Confederation officers from the TCS Lexington, among them Colonel Christopher Blair and Captain William Eisen, defected to the Border Worlds. They suspected that illegal combatants from within the Confederation had been instigating the conflict. The Intrepid was informed of their defection and arrived in the Masa System to collect them, but was pursued by the TCS Achilles, which fired a pair of torpedoes at the vessel. The hull around the crew quarters and bridge were breached, killing two-thirds of the crew, including Captain Dominguez.

The Intrepid survived the attack and command of the vessel was accepted by Captain Eisen. After the devastating attack, a replacement bridge and Combat Information Center were installed in the Auxiliary Control Room. Command later passed on to Colonel Blair when Eisen decided to pursue an internal investigation into the Confederation's military activities. Accommodations were primitive, as the crew had to use what little space was available as makeshift sleeping quarters. However, the vessel, despite its age and technological inferiority, served her purpose well and fought in many major engagements. She hampered enemy activities across the Border Worlds and intervened in the civil war in the Circe System. She was the first ship to respond to the disaster on Telamon.

When Colonel Blair discovered that a faction known as the Black Lance was responsible for the conflict, the Intrepid travelled at all speed to Earth in an effort to dissuade the Confederation from declaring war on the Border Worlds. She was pursued by the TCS Vesuvius but was rescued by the TCS Mount St. Helens, commandeered by Captain Eisen and his allies. The Intrepid managed to reach the Sol System and allowed Blair to expose the conspiracy to the Terran government, preventing a war.

After the conflict's resolution, the Intrepid was refitted as a training ship for potential pilots with the Terran Confederation, and stationed in the Sol System.

In the fan-made Secret Ops modification Wing Commander: Unknown Enemy, the Intrepid participates in the defense of the Border Worlds against Nephilim invaders at the beginning of the conflict in 2681. The carrier BWS Dauntless (formerly the TCS Kipling), which was about to be decommissioned before the conflict began, was preparing to transfer her remaining fighters to the Intrepid when she was destroyed.