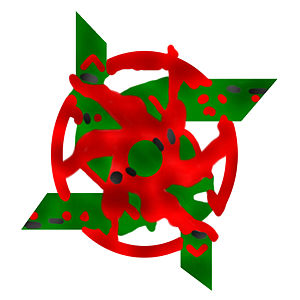 The Border Worlds Militia is a loose organization comprising of the Union's army, air force, and space navy. Its primary duty is the defense of all territories and interests under the jurisdiction of the Union.

The Militia is an inferior force compared to the Confederation Navy, lacking access to the sheer number of weapons and starships possessed and manufactured by the Confederation. During the early 2670s, the Union lacked the resources to mass-produce its own vessels and weapons, and thus relied on obsolete equipment and whatever they acquired prior to their secession from the Confederation.

Despite their technological and numerical disadvantages, the Border Worlds Militia is a patriotic and tenacious force that has proven resourceful in its goal of ensuring the safety and security of the Union.

Little is known of the Militia's activities during the Terran-Kilrathi War. However, given the fact that the Union and the Confederation were close allies, it is almost certain that they partook in numerous actions against the Kilrathi. Their territories suffered heavily during the War, as the Border Worlds lay on the frontier between the two main factions.

However, despite heavy losses and a lack of equipment, the Militia was led by a brilliant series of commanders who kept the war effort alive. Wartime veteran Daniel Wilford agreed to come out of retirement to lead the Militia as Vice Admiral, providing the Militia with a badly-needed fleet commander who was familiar with the Confederation's tactics. During the conflict, many veterans from the Confederation became sympathetic to the Border Worlds' cause and openly defected to them. Among these veterans were William Eisen, Jacob Manley, Tamara Farnsworth, Todd Marshall, and Christopher Blair. Their longtime battlefield experience gave the Union an edge it needed in its war against the Black Lance.

Throughout the conflict, the Militia employed guerrilla tactics to strip the enemy of its power and influence within the Border Worlds, launching hit-and-fade attacks on vulnerable installations, warships, and convoys. The Militia conducted raids whenever possible, capturing Terran weapons and naval vessels for their own use.

In 2673, Colonel Blair identified the Black Lance as the true instigator of the conflict, and led the Border Worlds in their efforts to expose the conspiracy to the Confederation. Their efforts were successful and the Confederation ultimately rejected all calls for war with the Union of Border Worlds. The Black Lance were promptly disbanded and peace was restored between the two factions.

Since the conflict of 2673, the Militia have organized themselves into a much more unified force and have largely abandoned their dependence on the Confederation Navy for defense.