FM Towns is a Japanese computer. They were the first computers to ship with CD-ROM drives standard -- so the FM Towns ports of many early Origin games have full speech (Ultima 6 is the famous one).

The PC98 was a Japanese computer that ran special versions of MS-DOS and Windows 95.

The Sega CD was called the Mega CD in Europe and Japan.

The Super Nintendo was called the Super Famicom in Japan. 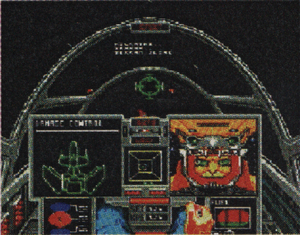 Wing Commander II was developed but never released. The decision was financial in nature: sales of Super Nintendo consoles declined more than had been expected for the 1994 holiday season and Wing Commander II was a large game which required a more expensive type of SNES cartridge. Review copies were apparently sent to magazines and the finished master was shipped to Pony Canyon in Japan. No copies of the game have been located.

The game is considered the last 'holy grail' of Wing Commander fandom; locating and preserving a copy is a major goal of WCNews.com.

This category has the following 23 subcategories, out of 23 total.

The following 2 pages are in this category, out of 2 total.