Expendable is the seventh episode of Wing Commander Academy aired and the sixth produced. 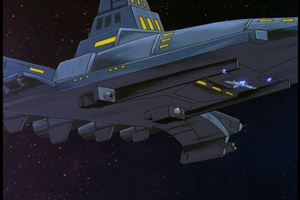 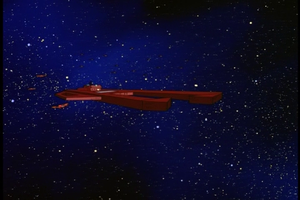 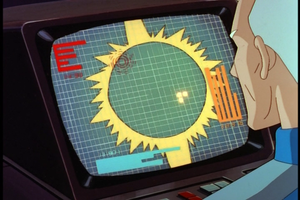 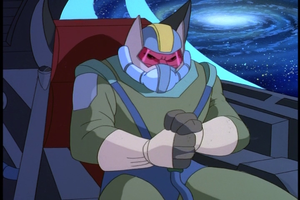 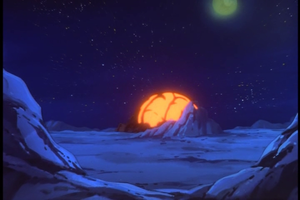 Tolwyn: We have an unknown contact near the jump node. Scramble and identify.

Maniac: Kilrathi for sure. Any sign of life aboard?

Nelson: Sir, that buoy might be useful. We could rig it track Kilrathi passage through this jump node.

Tolwyn: It's already useful to the Kilrathi. This is Tolwyn, destroy the buoy.

Maverick: Alright and keep your shields up, folks. Kilrathi jump buoys are equipped with automated defenses.

Maniac: Just sit back and watch the show, Maverick, maybe you'll learn something.

Archer: Probably too late for you to learn anything, Maniac.

Maniac: Hey, can the chatter Archer, we got a job to do. Oh man, I'm targeted. It's got a lock. One down, launch decoys.

Maniac: I've got two hot for my bod. Hang on, one more to go. But I can't lose it. It's almost on my tail. Aw, ejecting.

Maverick: Hang on Maniac, I've got you covered.

Archer: Continuing attack run. This time I got you.

Archer: Thanks, I needed that one.

Maverick: Well now I know why you kept me in reserve, Maniac. You knew you'd need somebody to save your tail.

Maniac: (laughs) The day I need you to save me is the day I hang up my wings, Maverick.

Tolwyn: Well let's see who was paying attention in astrophysics class. We'll start with what you know. When you jump through the gravitational node of an ordinary star it takes you to a neighboring star. So, where does the supernode generated by a pulsar take you?

Archer: Uh, that depends, sir. With the right velocity and approach angle you can jump past nearby stars to a pulsar with a corresponding frequency.

Maverick: Which could put you on the other side of the galaxy.

Tolwyn: And what's the only way to discover where the supernode leads?

Maniac: You jump through, sir.

Tolwyn: Exactly. Of course the Tiger's Claw is too important to risk on a node reconnaissance. But our Broadsword bombers are jump capable.

Payback: So would I.

Maverick: And me, sir.

Tolwyn: What about you, cadet Paz?

Grunt: I learned one thing in the marines. Never volunteer.

Tolwyn: I'm sending two Broadsword bombers into the pulsar node. Blair will command the flight, cadet Price will be his wingman.

Maniac: Sir, I... sir, I can handle the Broadsword better than Maverick. I'd like to...

Tolwyn: Are you questioning my orders, cadet?

Tolwyn: Good. Now remember, this is a reconaissance mission. You are to avoid contact with the enemy, engaging them only if necessary. You're no good to me reduced to atoms.

Maya: These control the wing plasma guns and the quad lasers linked to your heads up computer. Now this is your real firing particle cannon. That sets your dumb fire and image recog missiles.

Maverick: (laughs) Uh, I've checked out in Broadswords before.

Maya: Sorry, but I hear you're doing the long jump. I, uh, I equipped the Broadswords with extra life support packs.

Maya: I work hard to keep these things flying, you bring them back, okay.

Maniac: (huffs) I can't believe Maverick is going on this mission, it should've been me.

Archer: I'm sure the old man had his reasons.

Maniac: Yeah, like the Blair family connections. It takes more than a silver spoon in your m outh to put silver wings on your chest.

Guthrig: Commodore, some of the cadets have been complaining.

Guthrig: They seem to think you're showing undue favoriatism towards Maverick.

Tolwyn: They do, eh? (laughs) Well, tell them I'm not doing Maverick any favors sending him on this mission.

Communications Tech: Sir, jump data has been transferred to the Broadswords computers.

Payback: What do you think we'll find on the other side?

Maverick: Well it could be nothing. Or we could be flying into the whole Kilrathi fleet.

Maverick: Multiple contacts, all around us. At least two carriers. No, no, three. And something bigger.

Maverick: Keep them busy, I'll plot a course back to the jump node.

Payback: My pleasure. Say hello to your ancestors, furballs.

Maverick: Got it. Payback, I've got the jump coordinates. Break off pursuit, now.

Payback: There's no way I'm turning back now, Maverick, I've waited a long time for this.

Maverick: What? We're under orders, Payback. Do not engage, I repeat, do not engage.

Payback: Try and stop me. Just jump through to the 'Claw, I 'll catch up.

Maverick: I'm not leaving without you.

Gharal: You should have stayed on your home planet, Terran.

Payback: (groans) My shields are down.

Payback: Go ahead, furball, take your best shot. At least I got your destroyer.

Gharal: Wait, do not fire. We will take the Terran prisoner. Prepare magnetic grappler.

Maverick: Nobody messes with my wingman.

Gharal: (groans) Engines! Oh, can't restart. Ah, those who live among the stars, die among them.

Maverick: You in one piece, Payback?

Payback: Affirmative, thanks for the rescue.

Maverick: We'll talk about it later, right now we've got to scramble. Hang on.

Gharal: We Kilrathi say mercy is a weakness. Perhaps we are right, Terran.

Maverick: More Kilrathi between us and the node.

Payback: Just ditch my pod, you might be able to fight your way through.

Maverick: What? No way, we came together we're going back together. Arming torpedoes for timed flight detonation. Hang on, it's going to be a bumpy ride. Torpedoes away!

Thrakhath: This is Prince Thrakhath. I will send a squadron of Grikath after the Terrans. Report to me on the Agan Ras Sivar.

Payback: You're ticked off, I can tell. Look, I'm sorry. I wouldn't have blamed you for leaving me back there.

Maverick: What do you think you were doing back there? You know Tolwyn ordered us to avoid a fight. You cost us a Broadsword, you endangered the mission, sorry doesn't cut it. YUou know I would have expected something like that from a, from a glory seeking hot dog like Maniac but not you.

Payback: Are... are you going to tell Tolwyn that I disobeyed orders?

Maverick: (sighs) I have to.

Payback: They'll wash me out of the Academy.

Destroyer Captain: Lord Prince, we have driven off the enemy and destroyed one of his ships, your highness.

Thrakhath: Hmm. Some say I promoted you too fast, Gharal. If I have it is because I see in you the courage and the ability that I knew in your father. He was a great warrior, the glo ry of the Hhallas clan. You must hate the Terrans for taking his life.

Gharal: My father was a soldier.

Thrakhath: He was my friend, almost a second son to my father, the Emperor. I have decided to make you the captain of the destroyer Ras Nik'hra.

Destroyer Captain: But Prince Thrakhath, I am the captain of the Ras Nik'hra.

Thrakhath: Two destroyers guarded the jump node. One captain died with his ship, that is honorable. But to fail and still live, that is not honorable. Go and redeem your honor.

Destroyer Captain: (sighs) As you command, my lord.

Maverick: (sighs) That last laser hit took out our life support. I've patched us into the emergency backup in your pod but that's all we've got.

Payback: Will it... will it last till we're through the node?

Maverick: It'll be cutting it close.

Maverick: Well let me put it this way. If the Claw's not there to pick us up when we come out of the node well, we won't have long to worry about it.

Payback: How, how long?

Maverick: Three hours. One to go. (coughs) Oh boy, the air's getting bad.

Payback: I thought if I... if I could get away from my family, I'd be free. (laughs) I ran away when I was a kid, took a job with a mining company. Learned to fly ore shuttles. Oh it's so hard to be alone. Family is so much... if I'd known. They, they were on Icarus colony. On my way back, for the first time in years when the Kilrathi attacked. All gone. I don't ever want to be alone again. I saw the Kilrathi destroyer and thought maybe it's the one that dropped the bomb on Icarus. (coughs)

Maverick: (coughs) I joined the Academy because of my family. A Blair, worthy of the family name. First to volunteer, first to serve. (laughs) There was a Blair, a general, in the civil war.

Maverick: (laughs) All of 'em.

Payback: We made it!

Maverick: (coughs) Checking sensors. The Claw! They're not out there.

Payback: I knew we'd never make it. No luck.

Nelson: We're getting no life support telemetry from the Broadsword. We could try hailing them.

Tolwyn: You have your orders, maintain communication silence.

Guthrig: There might still be someone alive aboard that ship.

Tolwyn: I'm aware of that, doctor, but only one ship made it back. That means there are Kilrathi on the other side of the node. They'll be sending fighters in pursuit. If we power up, the Kilrathi will detect us when they come through. We'll lose the element of surprise.

Guthrig: Well what about the pilots out there, Payback or Maverick?

Tolwyn: A pilot is expendable. We all are. That's what it means to be a soldier.

Maniac: That's Maverick out there. I know it's him. Archer, this is Maniac, I'm powering up and going for that Broadsword. Maverick's alive.

Archer: Get off this commlink. You know your orders, hold this position. I don't like it any better than you do.

Maniac: I wanted to beat you, Maverick, but not like this.

Tolwyn: Open a commlink. Power up and engage the enemy.

Archer: They're heading for the jump node.

Maniac: This one's mine! Woo-hoo!

Archer: One of them's still making a run on the Broadsword.

Hyena: I'm out of position, I can't stop him.

Arnold Blair: Christopher? Wake up, Christopher. It's time to get up.

Arnold Blair: If you die, forty generations of Blairs die with you.

Maverick: Oh, dad. I'm too tired. I want to sleep.

Arnold Blair: Now son, you're a Blair, you've got no right to let go of a life it took so many to create. Just take my hand, Christopher...

Maniac: That's from the Broadsword. Maverick's alive back there.

Archer: Go ahead, Maniac, we've got things under control.

Maniac: I knew it was you, Maverick. That was some shot. Let's go home.

Maverick: Huh, lack of oxygen must have gotten to me. First I imagined I saw my dad. Then I thought Maniac (laughs) rescued me.

Maniac: (laughs) Yeah, fat chance. Next you'll be dreaming you're a better pilot than me.

Tolwyn: Don't you have duty, cadet?

Tolwyn: Then I suggest you get to it.

Tolwyn: I'll expect a full report when you're up and about, cadet. But tell me, what happened to your Broadsword? You were ordered to avoid contact with the enemy.

Maverick: Sir, the Kilrathi were on us as soon as we came out of the node. Cadet Price was hit as we fought our way back.

Tolwyn: Disobeying orders or lying to a commanding officer can get you expelled from the academy. We are all expendable. We each have to answer for our own mistakes. Is that really what happened? You were intercepted by the Kilrathi?