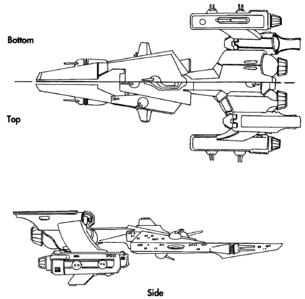 The Fralthi was a Kilrathi cruiser and light carrier. It was included in Joan's Fighting Spacecraft Vega Sector Supplement for 2654.092.

The Fralthi was at a time one of the most commonly-seen heavy warships in the Terran-Kilrathi War. These cruisers served as system patrol ships, capital ship interceptors, escorts, and even light carriers due to its fighter complement. It was a heavily-armed warship that could travel without escorts when necessary. They often filled the role of carrier during the Vega Sector Campaign, in addition to the Snakeir-Class Carriers.

The Fralthi line has been in service since 2504, when it served multiple factions in a series of clan wars that were brewing within the Kilrathi Empire. However, they have seen several revisions and modifications since their initial inception. By the time of the Terran-Kilrathi War, 2,000 Fralthis were active. In 2654, the current form of the Fralthi was introduced, and they began their service as light carriers.

The first time the Terran Confederation encountered the modern-day Fralthi was during a raid on McLaren in the Port Hedland System. Pilots from the TCS Tiger's Claw destroyed the Fralthi in this engagement, the first confirmed Fralthi kill in Terran history. These cruisers would see service throughout the whole of the Vega Sector Campaign in the 2650s, in which several were ultimately destroyed. Several Fralthis also comprised the task force that destroyed Goddard in 2654.

During the Siege of Firekka, the KIS Ras Nik'hra, commanded by Khantahr Ralgha nar Hhallas, defected to the Terran Confederation. It was the first Fralthi to be captured by the Confederation. A second Fralthi, the KIS Kraj'nishk, was destroyed in a failed attempt to destroy the Ras Nik'hra.

At some point after 2656, the Fralthi II-Class Cruiser entered service with the Kilrathi Empire, ending the dominance of the original Fralthi.

The Fralthi class seems to have been the primary battleship for inter-clan civil war for at least a century before the Kilrathi encountered humanity. In its basic configuration it has probably seen service for 150 years or more. Almost 2000 individual Fralthi-class ships have been identified in action, and several have been taken intact. Almost all Kilrathi fleet actions will involve at least one, and probably several, Fralthi.

The smallest Kilrathi ship to mount a carrier deck, the Fralthi class is capable of carrying a light squadron of about 50 fighters. With its three anti-matter main guns, it is very strong for its size in ship-to-ship actions, but carries a relatively small torpedo/missile loadout. It carries a complement of about 200 officers and crew, plus about 150 warriors.

Its engines are somewhat underpowered as compared to more recent Kilrathi ship designs, and it is both slow (in terms of top speed) and rather sluggish in its maneuvers. A Fralthi relies on its fighters and guns to repel an enemy, not on evasion or escape.