Price of Victory is the twelfth episode of Wing Commander Academy. 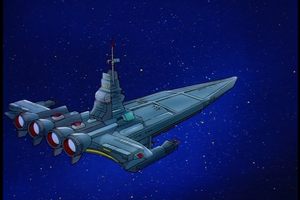 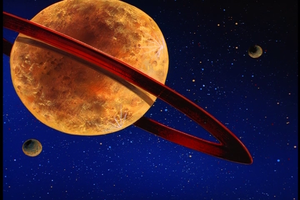 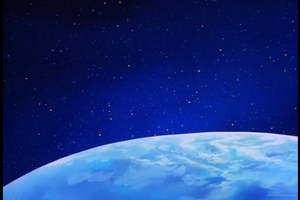 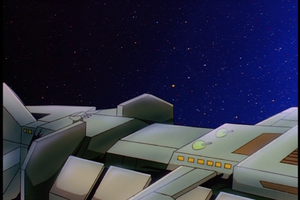 Maverick: Running planetary sensor sweep. Stay frosty, Clipper, the Kilrathi can't be far away. I can feel it.

Clipper: Roger that Maverick. Hope we find that Kilrathi carrier. I've got a score to settle.

Clipper: No sir, but it sure will make me feel better.

Maverick: Contacts, stay on my wing. Kilrathi fighters, coming out of the ring.

Clipper: They're on my tail. More bogeys, nine o'clock.

Maverick: Stay with me, Clipper.

Zukara: Cut them off. If we lose them in the rings, someone will pay.

Clipper: It's on you Maverick, get out of there.

Maverick: (grunts) Come on baby, give me the juice. (screams) I'm hit. Shields down, power failing, I'm down.

Maverick: Negative, get back to the 'Claw, that's an order, do it.

Maverick: That's good enough for landing. Come on, set it down.

Clipper: Repeat, Maverick is down. We were ambushed by Kilrathi fighters from a carrier orbiting the planet. Bogeys, they're still coming after me.

Clipper: I'm targetted. Breaking right. I got him, I got him. He is locked. (static)

Tolwyn: We tried to re-establish contact, we could not.

Maniac: Sir, Maverick's down on that planet, I'm volunteering for the rescue mission.

Archer: That makes two of us.

Tolwyn: There won't be any rescue mission, that's precisely what the Kilrathi want us to do. You'll be flying into a trap.

Maniac: But, but sir.

Tolwyn: The Kilrathi carrier will move now that its position has been reported. I want you on patrol to find it before it finds us.

Archer: What about Maverick, sir?

Tolwyn: He's on his own.

Zukara: The Terran, I want him destroyed now.

Zukara: Ah, perhaps the Terran. Let's just see, shall we? Find the Terran pilot! I want his life for Sivar.

Gharal: Highness, Prince Thrakhath has ordered me to convey you to the planet Dolos. It is almost time for the festival of Sivar. The Dolosians have been gathered for the sarcrifice.

Zukara: The Terran pilot down there is mine. I will not leave this pilot until he is found.

Zukara: I do not take orders from my brother. I too am of the Emperor's blood. Take your fighters down to the planet and help capture the Terran.

Bhok: At once, highness. Prepare to take off.

Bhok: You are lucky you no longer fly with us. The sacrafice on Dolos, is it trueh that the hrai will swear allegiance directly to Prince Thrakhath?

Gharal: As the chosen Claw of the Emperor, yes. A blood oath, stronger even than a warrior's oath to his clan.

Bhok: Then it is true, Thrakhath intends to destroy the clans. When he becomes emperor, the warriors will owe their allegiance only to him.

Gharal: What do you mean, Bhok?

Bhok: The war against the Terrans is just an excuse for the imperial family to take more and more power.

Gharal: Perhaps. The independence of the clans might be the price of victory. But the life of a warrior is to obey.

Bhok: Yes, it is our lives.

Maverick: (sighs) Not exactly how I had my day planned. Huh, cozy. Just like home. The Kilrathi!

Bhok: It's over, Terran.

Bhok: Be silent if you wish to live.

Pilot: Bhok, have you found the Terran?

Bhok: Not yet, continue searching.

Maverick: What? Why didn't you tell them about me?

Bhok: I wish to join you, to help you defeat Prince Thrakhath.

Maverick: Why? The Kilrathi don't even surrender, they sure don't defect.

Bhok: I have my reasons, reasons you would not understand. You do not know what it is to find the meaning of your life in your clan. To be Ragitagha, not just K ilrathi. Now, do you want to live or not?

Maverick: Can you get me off this planet?

Bhok: We could never make it to my fighter. But here is cold weather survival clothing, a transmitter, a weapon. Your hrai, your comrades, they will comefor you, yes?

Bhok: My carrier will soon leave to deliver a geological research team to the next planet in this system. If your commander will conceal his carrier in the sensor shadow of the planet's moon I will fly there and surrender.

Maverick: Yeah, and maybe bring a few squadrons of your closest friends with you. That'd be quite a coup, destroying the Tiger's Claw, you might even get a promotion.

Maverick: Why should I believe you? You let one pilot escape and you bag a whole carrier. I'm not going to help you set up a trap for the Tiger's Claw.

Bhok: There is not much time. The planet Dolos is to be sacrificed to the glory of Sivar. The Kilrathi hrai will swear an oath of allegiance to Thrakhath.

Maverick: What? I don't understand.

Bhok: The oath will mean that the Hrai must fight with Thrakhath even against their own clans. I will deal even with the Terrans to stop that, to save my clan. Thrakhath and the Emperor, they are Kiranka. My clan is Ragitagha, I will not let them destroy it.

Pilot: Bhok, the Terran ape is not here, we are moving on to the next passage.

Bhok: On my way! I will look for you on the hidden side of the moon.

Bhok: Bhok to Princess Zukara. Highness, there is no sign of the Terran pilot. He could hide for a thousand years in these caves.

Zukara: Keep searching until he is found.

Bhok: He is probably perished from the cold by now. Terrans aren't as strong as we Kilrathi.

Zukara: Then find his frozen body!

Maniac: Negative, not a peep on my screens. Say, why don't we tak ea closer look at that planet? You know, check it out?

Maniac: Hey, I, I'm looking for that carrier, okay?

Archer: Look, I want to find Maverick as much as you do.

Maniac: Hey, don't go getting soft on me again. I want to save his worthless hide so I can remind him of it every day of the life. (laughs) And it'll make him mad even more if I do it myself. See ya later.

Zukara: (growls) Foolish Terrans, I knew it. You risk everything for one life. Come to me.

Maverick: Maverick to rescue flight, do you read me?

Maverick: (laughs) I never thought I'd say it but it's good to hear your voice. Home in on my signal and when you move in, do it fast. I've got Kilrathi fighters a hundred meters away. I'll slow them down as much as I can. Heads up, furballs!

Maniac: that's as far as you get, furballs.

Archer: Where'd you get those clothes?

Maverick: (sighs) I'll give you the name of my tailor later. Let's go.

Archer: I got Maverick, let's get out of here before more Kilrathi show up.

Maniac: Yeah, yeah, yeah, just when it was starting to get fun.

Bhok: We cannot catch the Terran fighters. He has gotten away.

Zukara: You let the Terran escape. You dishonored the Emperor. You dishonored your clans. You should all commit Zu'kara and offer the life in your throats to Sivar. And I will take your lives myself.

Zukara: You presume too much on the protection of my brother, Gharal.

Gharal: I presume nothing, highness, but this carrier cannot complete its mission without pilots. For the sake of victory, they must life.

Zukara: (sighs) The price of victory is high. My duty to Sivar requires my presence on Dolos. That alone has saved you. Prince Thrakhath has shown you great favor, Gharal. But remember, my brother is not emperor... yet.

Bhok: Farewell, Gharal. It may be that we will not see each other again.

Gharal: There is that in every farewell.

Tolwyn: And you actually believe this Kilrathi intends to surrender?

Maverick: Yes sir, I believe him. There was something about him, something desperate.

Tolwyn: No, it's a Kilrathi trick, oldest one in the books. They're only trying to locate the Tiger's Claw.

Tolwyn: It won't be your pilot who comes to meet us but a Kilrathi attack force. No, I think we'll turn the tables on the Kilrathi with an ambush of our own. While the Tiger's Claw stays safely away from the planet we'll land a force of fighters on its surface. They'll wait until the Kilrathi carrier arrives. Then we'll spring a surprise of our own.

Maverick: I... I think you're making a mistake sir. This is a real opportunity to...

Maverick: Sir, I lead that man to believe..

Tolwyn: He's not a man! He's a Kilrathi, the enemy. It's your duty to destroy him. Now will you obey my orders cadet, or do you want to sit out this action in the brig?

Payback: You still think that furball was telling the truth about wanting to surrender?

Maverick: Well, yeah, that's what I told Tolwyn. I still believe it.

Payback: Yeah, we all know how much we can trust the Kilrathi. How's the old man expect you to command the attack force feeling like that.

Bhok: I'have given my life to Sivar. He doesn't exist.

Bhok: We will fly reconnaissance over the planet first. Then you three will remain behind to escort the research team down to the surface. I shall fly alone to scout the planet's moon.

Bhok: Sensors show no unusual contacts. Return to the carrier to escort the research team.

Bhok: Where are you, Terran? If you believed me, your carrier should be here.

Pilot: All fighters, targets rising through the planet's atmosphere. We are under attack.

Bhok: No, I kept my bargain! Why couldn't you act with honor?

Maverick: Okay people, let's get in fast. Watch out for those laser turrets.

Maverick: Knock out that carrier before it can scramble its fighters. Archer, go for the turrets.

Grunt: You got it, Maverick, on our way.

Maverick: We gotta knock out more of those laser turrets.

Maniac: Razor, cover me, I'm going through that catbox.

Razor: With you, Maniac, I'm your wingman.

Grunt: Maverick, we're going in for another run.

Maniac: Come on, baby, almost there.

Grunt: I'm hit, losing power. You're on your own, mano.

Maverick: I read you, Bhok.

Bhok: I trusted you. It was my life I offered you, not that of my ccomerades.

Maverick: I'm sorry. I tried, but I had my orders. Bhok, it's not too late for the others, for your clans. you could still help end this war.

Payback: I got target lock.

Maverick: Alright people, let's get back to the Tiger's Claw. Let's go home.

Maverick: The Kilrathi was trying to defect sir, it wasn't a trick.

Tolwyn: Well then, the information he gave us about the sacrifice on DOlos might be true. This could be our chance to strike directly at Prince Thrakhath.

Maverick: Then maybe Bhok didn't give his life for nothing.

Maverick: The Kilrathi pilot. His name was Bhok nar Ragiatagha.

Tolwyn: (laughs) Well don't trouble yourself over one Kilrathi traitor. The price of victory is paid in lives.