The Most Delicate Instrument

The Most Delicate Instrument is the third episode of Wing Commander Academy. 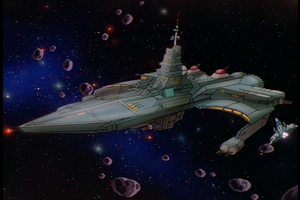 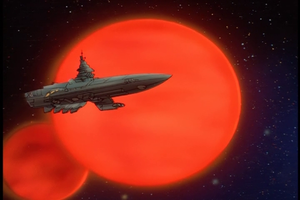 Tolwyn: Pay special attention to your drift indicators. These binary stars generate a complex gravitational field. There are no planets... the gravity has pulled them apart before they can form. Now your mission is to scout the asteroid belt. You'll divide into two patrols lead by cadets Blair and Getz.

Tolwyn: You launch in one hour. Watch out for flying rocks. Dismissed.

Payback: With all of space to choose from, Tolwyn can really choose some nasty asteroids for his training exercises. 'Watch out for flying rocks.' (grunts) Man, I hate asteroids.

Archer: Ah, the old man's got his reasons. The Kilrathi won't always let you pick where you want to fight. We need to practice.

Payback: So we play hide and seek in the asteroids. I just want one clear shot at a furball capship.

Blizzard: Archer, I want you to fly wing with me.

Payback: That's the most I've heard Blizzard say since he joined the Academy. I think he likes you.

Archer: (sighs) No way. He'd have to have emotions for that. And they'd get in the way of his flying. (laughs)

Payback: (laughs) Trust me, you don't want to know.

Guthrig: (clears throat) I'm on my way to the hangar deck to jog. Even a psychiatrist can appreciate the value of exercise.

Maverick: I thought it might be something like that. Well, we've got a training mission to fly.

Guthrig: I see. I believe numerous banter is useful in relieving pre-flight tension.

Archer: That's why we call him Blizzard... he's always frosty.

Maniac: I was just looking out for you, hotshot. Asking, uh, McEadance here if there was a way to boost your shields. There's an awful lot of rocks out here.

Maverick: Well, sure Maya, that's what I meant. What was that?

Maniac: We were hit by something, genius. Probably an asteroid.

Maya: That was a missile impact. Felt like the n umber six shield to me.

Tolwyn: Condition red. We are under attack. All pilots to your fighters. Repeat, this is not a drill.

Maverick: Break, break! He's not even trying to pull out.

Blizzard: Stay with me, Payback.

Payback: I'm on your wing, Blizzard.

Payback: This furball's not stopping.

Maverick: I'm on his six.

Maniac: Get out of there, Maverick.

Maverick: You had your chance, Maniac. This one's mine. Woah!

Sensor Tech: No sir. Astral flare. It's off the scale! Our shields are holding.

Tolwyn: What about the fighters? Their shields are a lot weaker than ours.

Tolwyn: Get those ships aboard, now.

Flight Control: That's it Blizzard. Pitch down a couple of degrees so you can see the hangar.

Flight Control: Good job, line up on the markers.

Flight Control: You're coming in too fast! Too wide! Too wide! Abort! Abort!

Archer: You're safe now! You're okay.

Tolwyn: It seems the larger star intermittently draws energy from the smaller one, creating an energy surge between them. You four were just unlucky, in the wrong place at teh wrong time. However, you've all been medically cleared for duty. So, on your feet! Everyone but Marshall, dismissed. Look, I understand you were flying Archer's fighter.

Marshall: Whatever she said, it's a lie. She's been jealous of me from the minute we joined the Academy.

Tolwyn: I was going to commend your initiative, Cadet.

Maniac: Archer's turned Tolwyn against me.

Archer: Blizzard? What are you doing in the dark?

Blizzard: Uh, nothing. I'm glad you came. Uh, I... I want to thank you for pulling me out of that.

Archer: Forget it, I would've done the same for any pilot in trouble.

Blizzard: Oh. I thought it was because you knew.

Archer: You, what? Oh, did Payback put you up to this? Oh, wait until I get my hands on her.

Blizzard: No, I've loved you since the first minute I saw you, Gwen.

Blizzard: I want you to have this.

Archer: Blizzard, you know I can't accept that.

Archer: Did you see which way Blizzard went?

Maniac: Why? You want to rat him out too?

Archer: I'm kind of worried something strange is going on with Blizzard. He said he well, he said that he was in love with me.

Guthrig: I see. How did you feel when he said that?

Archer: It was scary. I mean this is a guy who's always in control, like nothing could ever touch him. And suddenly he's all emotional.

Guthrig: Does it frighten you to think someone might be in love with you?

Archer: This isn't about me, it's Blizzard. And there's something weird about Maniac, t oo, the way he's been watching me and...

Guthrig: Do you think Maniac's in love with you too?

Archer: Will you just listen to me?

Kilrathi: We've got your family. We'll get yoo, too.

Hyena: Payback! Stop! Stop! What are you, nuts or something?

Payback: Where's the cat? You know, the Kilrathi? Where, where is he?

Hyena: You are nuts. Look, if this is your idea of a joke, get a sense of humor before you try another one, okay?

Maverick: And the Kilrathi attacked without any thought of their own survival. How can we hope to beat them? They're so willing to sacrifice themselves! What if we're not good enough? What if I'm not brave enough? Come in. What is it, Payback? What's wrong?

Payback: The Kilrathi. They're aboard the ship.

Maverick: What? The Kilrathi? Have you told Commodore Tolwyn?

Payback: I can't. If the Kilrathi found out, they'd get me. Just like they got my family.

Maverick: Payback was right! And now Tolwyn's gone over to them.

Archer: Sir, this may sound strange but I think that astral flare did something to the four pilots who were outside when we were hit. Affected their minds somehow.

Tolwyn: Really, Cadet Bowman. Maybe this has something to with Cadet Marshall taking your ship.

Guthrig: Uh, Bowman told me the electrical systems on those fighters were completely scambled. Technical section should've told me. The human mind is the most delicate electrical instrument of all.

Tolwyn: Are you saying their brains have been scrambled.

Hyena: Uh, Payback, I mean Cadet Price, attacked me, sir. Like she thought I was a furball.

Guthrig: Even the Kilrathi don't throw their lives away. They should've known their attack was futile. If they were in their right mind. Their judgement may have been impaired by exposure to a previous energy flare.

Maverick: They're on to us. Maniac and Blizzard are the only ones we can trust.

Blizzard: Gwen, open the door. You've got to help me.

Blizzard: Please, they're after me. You've got to help.

Archer: It is you, Alan. It's the real you. The one you've tried to hide all your life. You're afraid of yourself, of your feelings. Of the things that make you real. How could I ever care for someone that wasn't real?

Head Security Guard: Hold it right there. Even a rookie like you should know the crew's quarters are wired for security. Say, you're one of those cadets they're looking for. Crew level D, Security to bridge;

Maniac: Move it, we gotta get out of here.

Maverick: Maniac, Blizzard! They're after us. We've got to find a safe place to hide.

Maniac: I know a place.

Tolwyn: This is a direct order. Cadets Blair, Marshall, Price and Getz contact the bridge immediately.

Payback: The Kilrathi have got the whole ship.

Maverick: Even Tolwyn's gone over to them. I saw three Kilrathi on the bridge.

Maniac: Archer's in on it, too. I've been watching her. She sabotaged my weapons systems so they wouldn't fire.

Blizzard: No, not Archer.

Maverick: We're the only ones left.

Blizzard: What are we going to do?

Maverick: We take the Broadsword bombers, they're jump capable. We can escape to another system.

Payback: No, Broadswords are too slow. Tolwyn'll scramble fighters. They'll get us before we can even reach the jump node.

Maniac: Not if we destroy the Tiger's Claw. The Broadswords have enough firepower.

Blizzard: It's our only chance.

Maverick: Let's do it.

Tolwyn: Arrest Blair, price, Marshall and Getz. they may be dangerous. USe any force that's necessary. You know these people. Where would they go? What would they do?

Archer: They're pilots, sir. THey'd want to be in a ship.

Maya: Hey! If you want to know something about my birds you ask me.

Maverick: Are these two weapons prepped?

Maya: Yeah, they're ready to go. We've been on standby alert since we tangled with those Kilrathi.

Maverick: Sure, I'll bet you have.

Head Security Guard: Stay where you are, Blair.

Maniac: The Broadsword, come on!

Archer: We gotta go after them.

Archer: Maverick, listen. You gotta listen to me. That astral flare did something to your brain. I'm not a Kilrathi. You're hallucinating, it's all in your head.

Hyena: Like that brain scrambling couldn't have affected his aim, too.

Archer: Blizzard, this isn't you! You can fight it! I know you can!

Maverick: (scream) What? What am I doing? That's the Tiger's Claw.

Sensor Tech: One Broadsword's turned away. But the other's got a torpedo lock. The target's the bridge, sir.

Tolwyn: Divert all power to the shields. If just one torpedo gets through...

Archer: Alan, you said you loved me. If that's just a little bit true, you've got to believe me.

Guthrig: You need more psychological tests before I can return you to duty, but this bio-electric stimulation seems to have returned your brain functions to normal.

Maniac: How come you didn't zap Maniac, too?

Maverick: Don't worry, I got mine when Hyena's laser shorted out my cockpit circuits.

PaybacK: Too bad the treatment came too late for Blizzard.

Archer: There's something I've got to ask you, about Blizzard.

Guthrig: Depression and self-doubt are normal reactions to losing a comrade.

Archer: It's not about that. I did what I had to do to save the ship. It's about the hallucinations. Did they come out of nowhere or did they really mean something?

Guthrig: The delusions seem to have been exagerrations of surpressed emotions. Self doubt, jealous rivalry, fear of the Kilrathi.

Archer: Then Blizzard really did...

Guthrig: Blizzard really did what?