The Epsilon Sector was unevenly divided among many of the participants of the Terran-Kilrathi War, and therefore one of the most volatile theaters of the War. Star systems in this sector constantly changed hands, with many of these systems falling to the Kilrathi in the later stages of the Kilrathi War. The Terrans struggled to maintain control of the sector up until the end of the Kilrathi War. 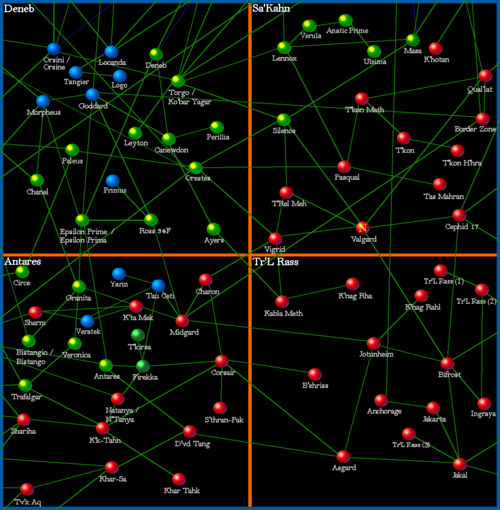 Shortly after their defeat in the Vega Sector, the Kilrathi sent a massive strike force under the command of Crown Prince Gilkarg nar Kiranka to destroy the Terran colony of Goddard. In this attack, the Kilrathi field-tested the Graviton Gun mounted aboard their flagship, the KIS Sivar. The resulting destruction annihilated all life on Goddard, and the vengeful Terrans sought out the complete destruction of the strike force responsible. The TCS Tiger's Claw was assigned the task of tracking down and destroying the Sivar and its task force, venturing deep behind enemy lines. The Sivar and its sinister weapon were finally tracked down and destroyed in the Kilrathi-controlled Vigrid System, and Gilkarg was summarily executed for his failure.

The Epsilon Sector was home to the Firekkans, an avian-like species from Firekka. The Terrans made first contact with the Firekkans in 2653, and they were accepted as members of the Confederation in 2655. Immediately thereafter, the Kilrathi invaded the planet as it had been selected to host that year's annual Sivar-Eshrad Ceremony during which the Kilrathi would pay tribute to their war god. The Terrans and Firekkans engaged in a prolonged campaign to wrestle the planet back from the Kilrathi through 2656, dealing the Kilrathi a major psychological blow with the disruption of the ceremony. After a costly holding action, the Terrans were eventually forced to withdraw, but the demoralized Kilrathi soon after abandoned Firekka, sparing its native inhabitants and ensuring the survival of their alliance with the Terrans.

By 2667, the Kilrathi had established their primary Sector HQ at Kabla Meth, from which they would oversee their continued sweep of the Epsilon Sector.

During the 2660s, the Society of Mandarins, a network of human traitors with sympathies for the Kilrathi Empire had established its main base of operations in the Epsilon Sector. A deep-space installation known as Ayer's Rock had been established in secret in the Ayers System, unknown to the rest of the Terran Confederation.

Even as the main theater of action shifted to the Enigma Sector, the situation in Epsilon remained unstable. By 2667, the sector was the scene of rebellion as the separatist struggle on the Kilrathi colony of Ghorah Khar provoked similar uprisings in nearby star systems of Shariha and N'Tanya. The Kilrathi's efforts to isolate the rebellion ultimately failed due to Terran intervention.

However, in the midst of this campaign the Kilrathi renewed their attacks on Epsilon, with an armada launching a massive invasion of the Deneb Quadrant. They proceeded to annihilate the Confederation Sixth Battle Fleet in a decisive victory, forcing the Terrans to abandon much of their territory in Epsilon.

That same year, a top-secret operation led by James Taggart and Christopher Blair succeeded in finding and destroying Ayer's Rock, killing most of the Mandarins' key personnel and destroying the infamous traitor network.

The final year of the War saw a dramatic escalation in tensions in the hotly contested sector, with the Terrans by then on the verge of total defeat. In 2669, the Kilrathi fielded biological weapons on the Terran colony worlds at Trafalgar, Delius, and Locanda, leading to the deaths of millions of civilians and forcing the Terrans to impose strict quarantine. This defeat also undermined Terran defensive positions in the Vega Sector. A blitzkrieg assault on Bistangio resulted in the deaths of thousands of Terran soldiers and the utter devastation of Bistangio. A Terran counterattack successfully liberated Morpheus, but did little to stem the Kilrathi onslaught. The government of Granita sought out negotiations with the Kilrathi, lobbying for a peace agreement that was soundly rejected by the central Terran government. In a last-ditch effort to win the War, Admiral Geoffrey Tolwyn introduced the TCS Behemoth, which started its shakedown cruise in the contested Torgo System before its ill-fated voyage to destroy Kilrah.

The Confederation's victory over the Kilrathi with the destruction of Kilrah via the Temblor Bomb did little to restore order in Epsilon, where civil unrest and piracy persisted into the postwar era. One such conflict was the Circean Civil War, fought between mercenaries and the legitimate government of Circe, resulting in thousands of lives lost across the system. The surviving Kilrathi leadership reestablished themselves in the Pasqual System, now the de facto capital of the former Kilrathi Empire.

By 2673, numerous star systems across Epsilon had aligned themselves with the Union of Border Worlds, declaring themselves independent of the Terran Confederation. The subsequent Border Worlds Conflict saw many engagements between the Terrans and the Union across the sector, largely instigated by the secretive Black Lance faction seeking to sow conflict between the two sides. Union volunteers eventually exposed the conspiracy and conflict across the Epsilon Sector died down. However, the conflicts on Circe and other worlds like Logo would persist in the years to come before a lasting peace could be achieved. The newly-recognized Union of Border Worlds has focused on unifying and strengthening its numerous colonies across Epsilon.