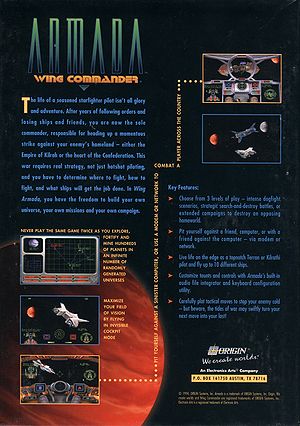 The life of a seasoned starfighter pilot isn't all glory and adventure. After years of following orders and losing ships and friends, you are now the sole commander, responsible for heading up a momentous strike against your enemy's homeland - either the Empire of Kilrah or the heart of the Confederation. This war requires real strategy, not just hotshot piloting, and you have to determine where to fight, how to fight, and what ships will get the job done. In Wing Commander Armada, you have the freedom to build your own universe, your own missions and your own campaign.

Never play the same game twice as you explore, fortify and mine hundreds of planets in an infinite number of randomly generated universes

Maximize your field of vision by flying in invisible cockpit mode

Pit yourself against a sinister computer, or use a modem or network to combat a player across the country

You must load NetBIOS to play over the network, as well as your mouse, sound and CD-ROM drivers.

Wing Commander Armada Manual & Voices of War (VEBE) (1.8 MB) Note that the Armada VEBEs are an old alternative to PDF files that may take some tweaking to install on newer systems. VEBE (Vermont Electronic Book Engine) must be installed, and must be run under win 95/98 compatability mode in Windows XP.

Same as the PC release.

Same as the PC release. The PC98 was a Japanese computer that ran special versions of MS-DOS and Windows 95.

This category has the following 7 subcategories, out of 7 total.

The following 25 pages are in this category, out of 25 total.