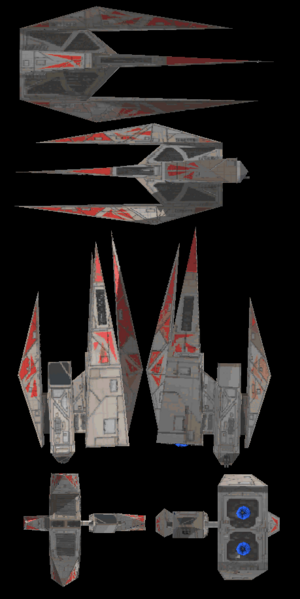 The Paktahn is a Kilrathi bomber design that served during the Terran-Kilrathi War.

The Paktahn is a powerful bomber model that, like many Kilrathi designs, became the bane of the Terran Confederation. The Paktahn carries a large payload and a plethora of lasers which makes it specially suited for attacks against Terran capital ships, transports, and space stations, as well as being a formidable fighter that could prove lethal to pilots attempting to assault it head on. Heavily armored and equipped with a lethal rear turret, the Paktahn could absorb a great deal of damage before falling to enemy fire. Its only real weakness is its low speed and maneuverability, leaving it unable to outrun most Terran fighters without the use of its afterburners.

The Paktahn is most famous in public eyes for its role in the destruction of the TCS Behemoth, an event that was only made public knowledge after the end of the Kilrathi War. The design saw a renaissance during the Nephilim War, when General Wright suggested creating a cloak-modified variation of the Paktahn in the midst of the Ardai Campaign. Field-modified Paktahns formed the basis for what would become the Paktahn Phantom, which proved itself quickly in battle, giving rise to the Paktahn Tusk, a mine-layer variant based on the Phantom. Unlike most mine-layers, however, the Tusk is not an easy target for a fighter, capable of combining a deployed turret, standard bomber turrets, and regular guns to trap and destroy enemy fighters. The Paktahn Mauler, meanwhile, is the heaviest Paktahn variant to ever exist possessing an extremely heavy armament for one purpose: the total destruction of enemy capital ships and bases.