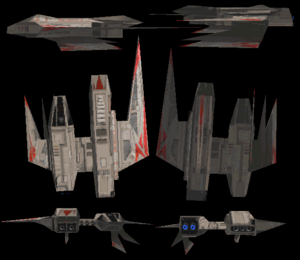 A Darket Target recognition in 2669.

The Darket is a light spacecraft fighter. It was first introduced in 2668 by the Ki’ra Clan.

Its relative lack of armor and light shielding were compensated for by its ability to evade enemy fighters, making them difficult to track. Valued for its fast turn rate and acceleration, the sleek, fast design saw heavy usage throughout the Terran-Kilrathi War.

The Ki'ra Clan was not dissuaded by the Empire's defeat in 2669, but continued to improve upon their design over the course of the Nephilim War, giving birth to at least three unique variants of the fighter equipped for various roles.

They were also later adapted to include Blackfish-type cloaking devices, which made them an especially lethal threat in the post-Nephilim era frontier, where piracy and general lawlessness were commonplace in some sectors.

The Darket Stalker was a pirate favorite around 2700 for its ability to ambush unsuspecting commercial traders on the space lanes.

The Darket first appeared in Wing Commander III: Heart of the Tiger. Three variants of the class are later seen in Wing Commander: Arena where the flyabl e fighters include the Darket Dragonfly, the Darket Raptor, and the Darket Stalker. Darkets also appear in the novel False Colors being flown by the Free Republic of the Landreich.