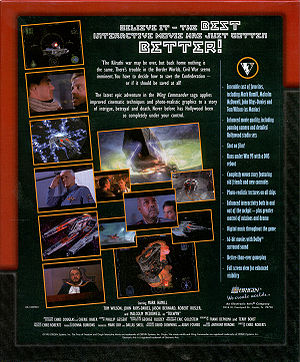 Believe it - the BEST interactive movie has just gotten BETTER!

The Kilrathi war may be over, but back home nothing is the same. There's trouble in the Border Worlds. Civil War seems imminent. You have to decide how to save the Confederation — or if it should be saved at all!

In 1995, Origin created several beautiful magazine covers to promote Wing Commander IV. Rather than simply capture screens from the game itself, these renderings were unique works of art. Now you can see the original resolution images, as they were created before being sent off to the magazine editors! A fourth image was created for [Electronic Entertainment], although the source file has not been located.

Created for bundling with a Creative Labs Encore DVD kit. Same as the PC (Win95) version, but with high quality video sequences - as clear as a real movie rather than higher compression Xan movie.

Identical to the initial PC release.

Cuts out a significant amount of video and missions (no Circe Series, for instance). Ground missions replaced with new space-based missions with similar objectives. Briefing videos altered slightly to represent this.

Thanks to Mad Hatter. (Details, more)

Behind The Scenes Of WCIV Carlos Mendonça found something really neat that we don't recall seeing before - seven behind the scenes videos from the set of Wing Commander IV! They were found in the January 1996 copy of Multimedia World Live! and are a mixture of interviews, behind the scenes action, and even a blooper video. Here they are in their original form of 320x240 12 frames/sec Cinepak video and 8 bit sound.

This category has the following 7 subcategories, out of 7 total.

Pages in category "Wing Commander IV: The Price of Freedom"

The following 33 pages are in this category, out of 33 total.

Media in category "Wing Commander IV: The Price of Freedom"

This category contains only the following file.