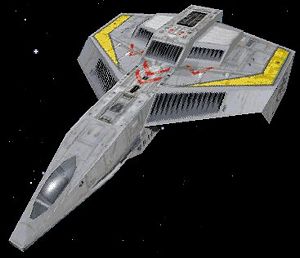 The Hellcat V is a medium fighter that saw extensive service with the Terran Confederation beginning in the 2660s.

The Hellcat V was the workhorse fighter of the Confederation during the Terran-Kilrathi War. The Hellcat V is a strong contender for the best all-around fighter in the fleet during its service era. Lacking the acceleration and speed of an Arrow or the power of a bomber, the Hellcat is best suited for SWaC (Space Warning And Control), reconnaissance in force or escort missions.

By the end of 2669, Hellcat V squadrons were stationed on almost every carrier and installation in the service of the Terran Confederation. Some also saw use by the Union of Border Worlds and pirate groups like the Black Lance, albeit in limited numbers. Aside from serving in the Terran-Kilrathi War, they also saw extensive action during the Border Worlds Conflict of 2673.