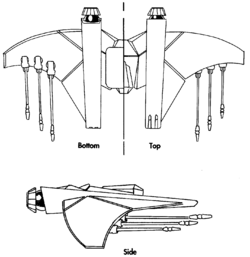 The Jalthi was a Kilrathi heavy fighter. It was included in Joan's Fighting Spacecraft Vega Sector Supplement for 2654.092.

The heavily armed Jalthi was unquestionably one of the most feared fighters among its Terran opponents. Though its low speed and poor maneuverability were weaknesses which could be exploited, its infamous "six shooters" were the bane of many Terran pilots. Jalthi squadrons, considered the plum assignment of the mid-war Kilrathi fighter forces, generally went to Kilrathi of noble blood. Bakhtosh nar Kiranka, noted ace and politician, achieved 34 kills flying a Jalthi during the Vega Campaign.

The Jalthi continued to serve with active squadrons through to the 2668 Battle of Earth, despite the fact that its role was largely superseded by space superiority fighters such as the Gratha and Hhriss.

In March 2654, a pair of Jalthi posed as crippled fighters to ambush a pair of Scimitars. One Jalthi simulated maneuvering damage by moving away with intermittent thrusters while the other shut down entirely and simulated the loss of its stabilization hardware. Against orders, Lieutenant Larry Dibbles took the bait and attacked the moving fighter. The second Jalthi powered up and attacked Dibbles' wingleader, Captain R.A. Skinner. After Skinner's fighter was destroyed, both Jalthi concentrated their firepower to destroy Dibbles' ship. The incident was the impetus for Taggart's Tactics.

Aboard the TCS Tiger's Claw, Michael Casey gave Christopher Blair the advice to never attack a Jalthi head on due to the Jalthi's six front-mounted cannons. Casey claimed that if he did, the first shot would take out the shields and the second would blow through the cockpit into the reactor. Later, Sam expanded on this advice, telling Blair that due to the fighter's poor rear design, which had no rear visibility and large exhausts, to always attack from low and behind the fighter. To quote the Claw's bartender, "just jam a missile up those rear pipes and -- BOOM! No more kitty".