Behind the screens, the process started months earlier, when Chris Roberts drafted a seven-page proposal for a game he called Squadron, which would become the Wing Commander we love. Page 6 is missing.


The Ultimate Strategy Guide to Wing Commander I & II includes a wonderful history of the making of both games called 'Software Meets the Movies'. Thanks to Pix's scan, we are able to post the 'Making of Wing Commander I' portion of the book! This is a fascinating look not at only how the game was made, but also at how Origin worked in 1990-91. 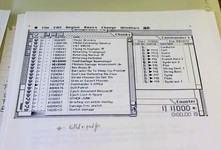