Captain of Your Own Destiny


This early 1992 Origin advertisement booklet shows off the Wing Commander series... and features an extremely obscure piece of temp artwork for the Privateer box! This black-and-white drawing of a Centurion fighting a Stiletto is something we hadn't seen before.


This ad appeared in PlaySF digital magazine, following an article about Wing Commander and Christopher Blair.


A full page ad for Privateer, in Korean.

Where Deals Are Made With a Handshake


This full page ad focuses on the box art with a set of mostly final screenshots. The ship dealer screen seems to be selling a Plasma Gun for a mere 15,000 credits however! It has pretty exciting taglines and text which sets the tone for the game very well. 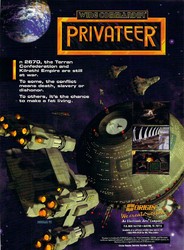 
This full page advertisement is similar to other contemporary ads for Privateer, but the text has some striking differences. Comparison in the news update. 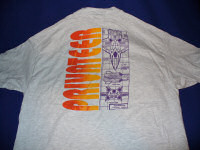 
Per tradition, design teams at Origin would create a team shirt for each product being developed. Working on Privateer's team would have earned you an especially cool t-shirt! Check out this awesome Centurion!


A great Privateer preview from PowerPlay magazine. The most interesting thing, though, is that it's using early mockup images--check out the fully 3D ships in the cockpit image... and a cinematic scene with Demons! 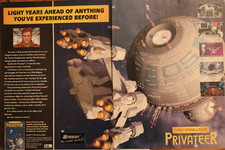 
This two-page Privateer advertisement appeared in a November, 1993 issue of Generation 4 magazine in France. A similar ad appeared in UK publications, with a somewhat different variant in the United States. Both European versions have the same small error: claiming the game is set in 2670 instead of 2669.