Wing Commander II: Vengeance of the Kilrathi was one of many evolutionary steps in the Wing Commander series. WC2 used an upgraded version of the original Wing Commander's flight engine, but the story and presentation were drastically overhauled. Routine conversations in the bar, mission briefings and post-flight debriefings were often replaced with casual interludes, dramatic exchanges and emergency events that sent the game in unpredictable directions. The story took our hero, Christopher Blair, from exile to the front lines of the Enigma Sector where he had to prove his innocence for the destruction of the TCS Tiger's Claw. Old friends and new characters were brought to life with real recorded voices in an optional speech pack. Wing Commander II sold sound cards to a generation of PC gamers and almost single handedly made the SoundBlaster a household name. The game's introduction was a breathtaking forebearer of the cinematic turn the industry would take a few short years later. 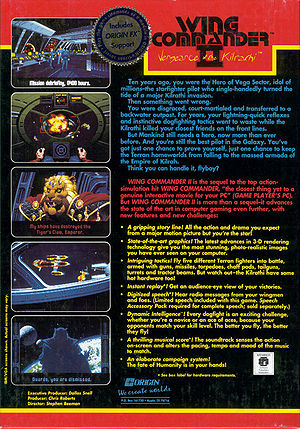 Thank you can handle it, flyboy?

Although the game is complete somewhere, no prototype has ever surfaced and no members of the development team have copies. Because of the odd numbering of SNES ports (Wing Commander 2 is actually the third game, after Wing Commander and The Secret Missions), most mainstream SNES groups do not realize the title existed.

Thanks to Sébastien Caty and Joe Garrity. (Details, more)

Pages in category "Wing Commander II: Vengeance of the Kilrathi"

The following 6 pages are in this category, out of 6 total.