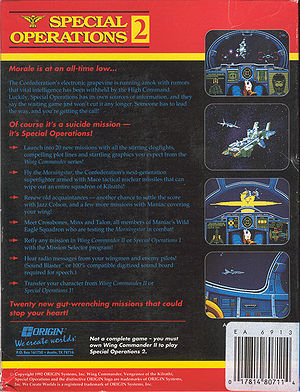 Morale is at an all-time low...

The Confederation's electronic grapevine is running amok with rumors that vital intelligence has been withheld by the High Command. Luckily, Special Operations has its own sources of information, and they say the waiting game just won't cut it any longer. Someone has to lead the way, and you're getting the call!

Of course it's a suicide mission —


Twenty new gut-wrenching missions that could stop your heart!

Not a complete game - you must own Wing Commander II to play Special Operations 2.