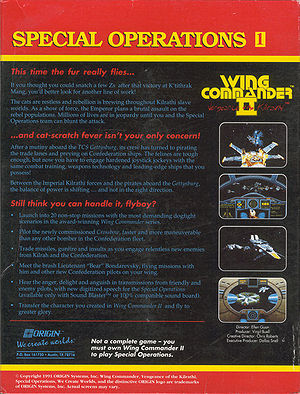 This time the fur really flies...

If you thought you could snatch a few Zs after that victory at K'Tithrak Mang, you'd better look for another line of work!


The cats are restless and rebellion is brewing throughout Kilrathi slave worlds. As a show of force, the Emperor plans a brutal assault on the rebel populations. Millions of lives are in jeopardy until you and the Special Operations team can blunt the attack.

...and cat-scratch fever isn't your only concern!

After a mutiny aboard the TCS Gettysburg, its crew has turned to pirating the trade lanes and preying on Confederation ships. The felines are tough enough, but now you have to engage hardened joystick jockeys with the same combat training, weapons technology and leading-edge ships that you possess!


Between the Imperial Kilrathi forces and the pirates aboard the Gettysburg, the balance of power is shifting...and not in the right direction.

Still think you can handle it, flyboy?