An old vessel, the TCS Victory (CV-40) was scheduled for decommissioning by the early 2660s. Yet, the Confederation's need for carriers kept her in service. Indeed, the heavy losses sustained following the Battle of Earth forced more ships like the Victory to the front in 2669. Captain William Eisen served on-board the Victory on her maiden voyage as Communications Officer. Captain Eisen served on the Victory several times throughout his career before being assigned as its captain.

After the loss of the TCS Concordia in 2669, Colonel Christopher Blair was reassigned to the Victory as the new Wing Commander of Flight Wing 36. Upon assuming command, Colonel Blair led the Victory's flight wing with great distinction. The Victory oversaw combat tests for the new F-103 Excalibur while stationed in the Tamayo System, during which it repelled a Kilrathi invasion of the system. The Victory also led the Confederation's attempt to liberate the enslaved Locanda System from the Kilrathi forces stationed there, although this campaign ultimately ended in disaster. The Victory was forced to pull back to defend Blackmane as the Confederation transferred its military assets out of the besieged system, which proved to be a successful campaign.

The Victory led a retaliatory strike against the Kilrathi by attacking the enemy-controlled Ariel System, during which it inflicted significant damage on the Kilrathi garrison there. Although eventually forced to retreat, the campaign proved damaging to the Kilrathi, who deemed it necessary to awaken their sleeper agent who had been conveniently reassigned to the Victory alongside Blair: Colonel Ralgha nar Hhallas.

The Victory and her task force were specially selected by Admiral Geoffrey Tolwyn to serve as escorts for the TCS Behemoth, a massive dreadnought designed with the intent of destroying the Kilrathi home world, Kilrah. The task force, personally led by Admiral Tolwyn successfully tested the weapon on Loki VI, but were again met with defeat when Ralgha nar Hhallas leaked the Behemoth's weaknesses to the Kilrathi, leading to the ship's destruction by Strakha Stealth Fighters from the KIS Sar'hrai. The Victory however was again tasked to lead the effort to destroy Kilrah by General James Taggart, head of Confederation Special Operations Division who intended to destroy the planet with the Y22A-1 Temblor Bomb.

It was ultimately a pilot from the TCS Victory, Colonel Christopher Blair, who with the aid of his squadron mates delivered the Temblor Bomb to the surface of Kilrah, completely destroying the planet and finally ending the Terran-Kilrathi War.

Following the war, Victory was decommissioned and became an orbiting museum. It remains in Jupiter Orbit in the Sol System as a monument to the war. Todd Marshall once joked to Christopher Blair that the museum had installed a little plaque right over his bunk. 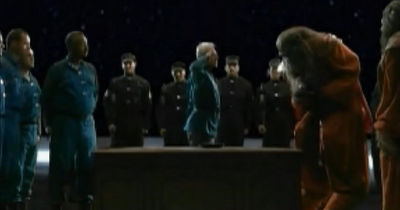 Signing of the Treaty of Torgo