The F-103 Excalibur Heavy Fighter is a starfighter in the service of the Terran Confederation.

The Excalibur is a heavy fighter that was first developed in the 2660s. At the time of its introduction in 2669, it was one of the most advanced starfighters in Terran service. It was designed as a space superiority fighter and was fitted with a large and powerful armament designed exclusively for this role. It could also be adjusted to serve a variety of roles, and its weapons loadout could be configured to carry heavy weapons of various sorts. It also could be fitted with a cloaking device for the purpose of high-priority stealth missions.

The Excalibur was developed in the 2660s during the Terran-Kilrathi War. By 2669, several combat-capable prototypes were being field-tested. In 2669, the TCS Victory was selected to host field tests for the Excalibur in the relatively peaceful Tamayo System. A prototype piloted by Major Jace "Flash" Dillon was sent to the Victory to carry out these tests. It was during a Kilrathi incursion in Tamayo that the Excalibur saw its first combat action.

After the destruction of the TCS Behemoth in its failed attempt to destroy the Kilrathi homeworld of Kilrah, the Confederation elected to deploy the Temblor Bomb to destroy the planet. A handful of Excaliburs were sent to the Victory to carry out the mission. Colonel Blair's Excalibur had been configured to carry the Temblor Bomb, and the entire squadron of starfighters had been fitted with the first Terran incarnation of the cloaking device. Colonel Blair and his squadron penetrated the Kilrah System and soon assaulted the planet. Colonel Blair's entire wing was shot down, but the Colonel himself managed to break through the planet's defenses and deploy the T-Bomb, destroying Kilrah and finally ending the Terran-Kilrathi War.

The Excalibur continued to see limited service after the end of the Kilrathi War. In 2673, the Black Lance acquired several of these fighters for use in raids against the Union of Border Worlds as a means of provoking war between it and the Confederation.

By 2681, the Excalibur remained active, but had since been superseded by newer starfighters developed during peacetime. Many of these served in battle against the Nephilim. 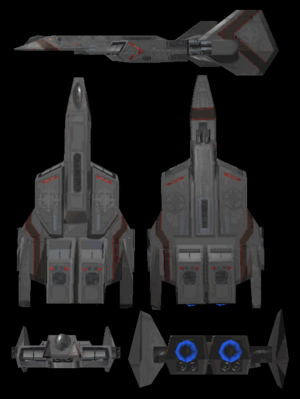 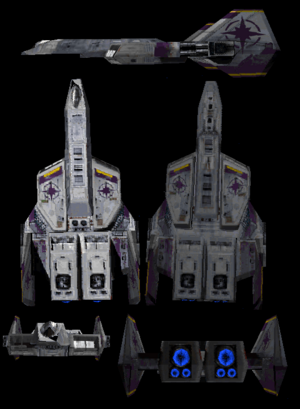