None - Bradshaw heads straight back out after the last mission.

Reismann: Now that the diversions are taken care of, Captain, we need you to get back out there and cover the real strike. You see, each of our strikes served as cover for a group of Marine boarding shuttles. The plan is for the Marines to plant and detonate antimatter mines where they can do the most damage - right inside the Kilrathi capships. These shuttles are now about to enter the combat area, and they...
Freyers (voiceover): Attention, we are under attack. All hands to battle stations, all pilots to your fighters. This is not a drill. Repeat, we are under attack.


Reismann: Don't those bastards ever run out of ships? Get to your plane, Captain!

While the mission objectives for the mission say that the goals are to protect the Firekka and the Saratoga, for about 90% of the mission your real goal will be survival - there's only one very short period where the carriers are in any danger, but with this many Kilrathi including six Vatari, you'll be in danger almost the whole time. Fortunately, the 45 Kilrathi ships in this mission don't all arrive at once, instead arriving broadly in three waves at the start of the mission, after two and a half minutes, and after 5 minutes. 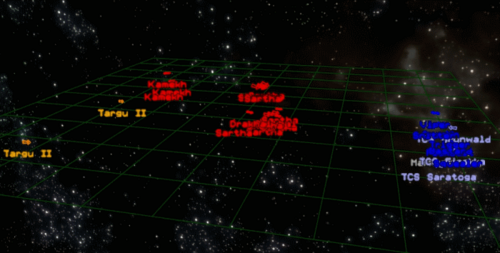 The first wave is the largest, and the only one with capital ships in it. It doesn't, however, have any bombers, and the corvettes and frigates will take a long time to get into firing position, so we can leave them be for now. What can't be ignored are the Vatari. Fortunately, you're in a fighter loadout Sabre and it has four dumbfires, which is very conveniently one for each Vatari. Use them and thereby preserve the remainder of your fighter force, who won't last long againt Imperial Guard in their latest superfighter. Killing Sartha in a Sabre is difficult, and normally the easiest way is to let them turn and come at you, since the Sabre's shields can take a couple of neutron hits (though not much more), or alternatively to get them as they break away from you after a pass. If you kill the fighters the frigates and corvettes will almost certainly be taken down by the other Sabres.

Provided you get a few kills in quickly and preserve your force then things will go OK, but if you start to lose fighters and the enemies:friendlies ratio gets north of 2:1, things do start going downhill quickly and you can find yourself almost alone by the time the second wave arrives. Speaking of which, there's a slight problem with deployment when that happens: since you'll likely have been finishing off the frigates and corvettes, you'll probably be very out of position to intercept the two Gothri bombers which arrive as part of the second wave. 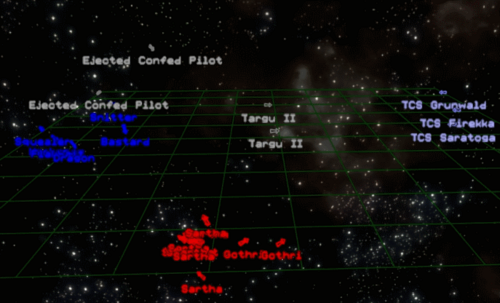 Fortunately, they seem to be very cautious, and if you just afterburner after them they give up on torpedo runs once you close in far enough, or at least they did on the run that produced that map. If they don't, image recognition missiles will force them to break off, so it may be worth holding on to those until at least this point (though they're excellent anti-Sartha weapons). Once they're down, the middle wave contains no Vatari and is relatively easy to deal with; killing the nearest fighter works just fine. If you're in trouble, it's worth trying to fight in the shadow of the Grunwald, Firekka and Saratoga, all of whom have a decent number of turrets which can help you out. It's also worth it because that's the direction you've got seven wings of reinforcements coming from, if you survive for 4.5 minutes: 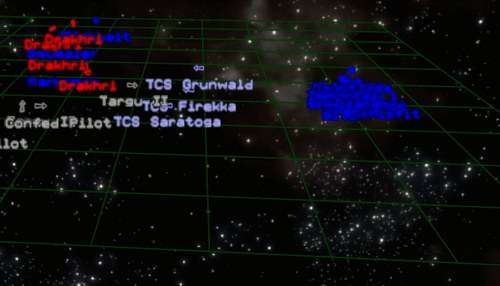 Once these fighters have arrived, you're more or less safe - you outnumber the final Kilrathi wave somewhere in the region of 2:1, so it's only really the Vatari that might give any cause for concern, especially since by this point you're probably out of missiles (well, except for the torpedoes. You cannot torpedo a Vatari). With the odds so strongly in favour of the Confed forces here though, it's probably easiest to try and rack up Sartha kills, and hope that the Vatari get stuck facing off against four Rapiers at the other end of the battle. My approach to dealing with them was only to go after them if they went after me - chasing danger when you've got numbers on your side is not life-prolonging

Likewise, once there's only one or two enemies left, hang back. Friendly fire from 20 fighters is a bad thing.