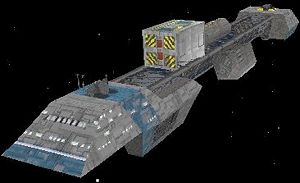 Clarkson at the end of the Terran-Kilrathi War, circa 2669

The Clarkson-class Transport is a class of transport that has served the Terran Confederation for many decades. It saw extensive use during the Terran-Kilrathi War.

The Clarkson's primary purpose was to ferry supply to various locations and fleets along the front lines to maintain the Confederation's war efforts against the Kilrathi. It also served as a refueling ship, troop transport, and evacuation ship, depending on the nature of their mission. The Clarkson consists of a large bridge connected to the engine module by a long "girder", which serves as the ship's spine. Along this spine is where the Clarkson ferries its numerous supply and passenger modules for transport across the galaxy.

Like most transports, the Clarkson is a poorly-armed vessel with no more than two laser turrets for self-defense. Therefore, it relies on escorts if it is to survive its various trips across the galaxy.

The Clarkson was a common sight in Terran airspace during the Terran-Kilrathi War, serving both the military and the civilian populace. They played an essential role in keeping Terran fleets sufficiently supplied and ensuring the survival of Terran citizens caught in the crossfire.

In 2669, the TCS Victory was briefly assigned to the Orsini System to protect civilian shipping from Kilrathi raiders. Many of these vessels were Clarksons.

After the destruction of Locanda, the Terran defense at Blackmane collapsed due to the oncoming Kilrathi assault. Several Clarksons participated in the evacuation of Blackmane Starbase. During the evacuation, the Kilrathi attempted to use captured Clarksons as a means to lure in unsuspecting pilots and exterminate them by detonating the bomb-laden vessels. The tactic failed largely due to the leadership of Colonel Christopher Blair.

Clarksons continued to serve humanity even after the war ended in a Confederation victory, and many remained active in spite of the gradual reduction of the ships serving in the Terran Confederation Navy.

Clarksons, unfortunately, became a constant victim of enemy raids during the 2670s, in which the Border Worlds Conflict arose due to the illegal activities of a secret faction known as the Black Lance. Several Clarksons were destroyed by the Black Lance in an effort to incite warfare between the Terran Confederation and the Union of Border Worlds, in the hopes of returning humanity to its former military strength. One of the most infamous incidents involving a Clarkson was the destruction of the TCS Amadeus in 2673. The ship was ferrying civilian refugees on the frontier to Megaron when the Black Lance killed its escorts and destroyed the ship with a Flash-Pak, leaving no survivors.

During the conflict, a modified version of the Clarkson appeared in the Peleus System, serving as a jammer so that the Black Lance could sabotage communications between Border Worlds vessels in the system. The jammer caused significant damage to Border Worlds shipping before it was finally destroyed by forces from the BWS Intrepid.