This well edited piece, "Countdown to Launch!", combines footage from the Arena trailers with scenes and music from Wing Commander III. 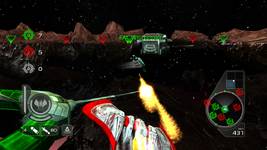