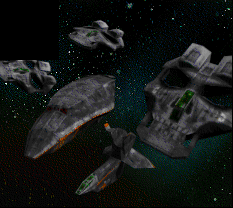 BACKGROUND:
Little is known of this clan except that it derives its origin from a bunch of post-new age travellers, mainly humanoid, with the odd bit of spiritual customisation here and there. They are not the most aggressive pirate clan in the Tri-System, but are nonetheless fearsome predators during lean periods in the piracy business. Avoid.

This clan is mostly humanoid, a group of post-New Age raiders that veered permanently to the left. Environmentalism and animal rights are on their political agenda, and they are attracted to shipments of laboratory animals, lumber, hazardous chemicals, artificial body parts and so forth. They prefer to emphasize the political goals of their actions and generally do not do things for money. However, dissension doesn't pay well, and the need for money will occasionally drive them to double-dealing and even hit jobs. Rumor depicts them as the least-threatening clan, although the Jincilla Skull ships are tough enough to beat.