Customize Your Difficulty with Wing Hard

Sheppard has expanded on his patches that neutralize asteroid damage with a brand new tool. Wing Hard is a nifty app that modifies WC1&2 ship damage values in order to allow players to customize the difficulty just to their liking. Rather than making yourself invulnerable or killing enemy ships with the push of a button, you can carefully tweak everyone's armor values to balance the right amount of challenge and fun. As an extra bonus, his asteroid knowledge has also been included so you can adjust the radius of impact and increase or decrease how deadly the rocks are. Grab the app here (3.3 meg zip) and run it in your game folder to get tweaking! You can learn more about exactly which files to modify at the CIC Forums here.

This program lets you fine tune WC1 and WC2 (GOG releases) difficulty to what you feel is correct.

Basically, I programmed in all the offsets for Terran Confederation Ships/Craft's shield/armor values, along with their stock base values. So for example, if you enter a multiplier of 1.5 for difficulty for Terran Ships; the game becomes easier because you now have more armor.

Over in asteroids; difficulty is changed via changing the radius of asteroids in the game via a multiplier. Radius is effectively the size of the in-game collision hitbox. Stock Asteroids have a radius of 100 in both WC1 and WC2. You can now adjust how "hard" asteroid fields are -- eliminating them entirely, if you enter 0.05, it computes a radius of 5, effectively removing them as a threat in the game.

The reason for the huge file size (for what it does) is because it's written in Python v3.x; and if you want to make a distributable executable for python scripts, the packager puts EVERYTHING IN, i.e. an entire python distribution is scrunched into the executable. Filesize issues are offset by the fact that Python is much more pleasant to program for as a hobbyist doing hobbyist things, and there's more tutorials or answered questions for things I want to do in Python. 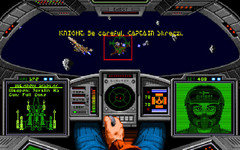 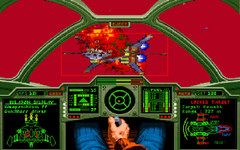