The Ralaxath-Class Heavy Destroyer that served with the Kilrathi Empire during the latter stages of the Terran-Kilrathi War. 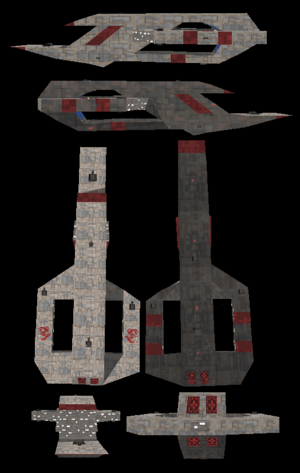 The Ralaxath is a heavier warship in comparison to its cousin, the Ralarrad-Class Light Destroyer. It possesses a heavier armament and is therefore a dangerous threat to any Terran warship that approaches it. However, unlike the Ralarrad, it does not carry a starfighter complement and therefore flies with escorts.

The Ralaxath entered service during the later stages of the Terran-Kilrathi War. Colonel Christopher Blair first encountered a Ralaxath in the Freya System in 2669 during the Terran Confederation's offensive in the system.

When Colonel Blair and his wing departed for Kilrah with the intent of destroying the Kilrathi homeworld with the Temblor Bomb, he and his wingmen encountered several Ralaxaths while en route to the planet.