The Kilrathi Ralarrad-class Light/Escort Destroyer was a light destroyer in the service of the Kilrathi Empire. 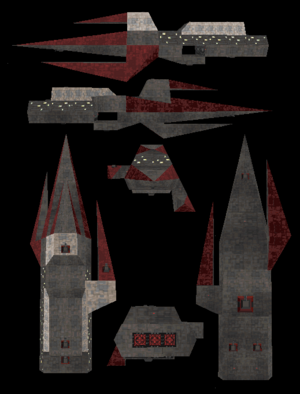 The Kilrathi light destroyers had eight heavy laser turrets in its arsenal for combating smaller Confederation capital ships and starfighters. It was also capable of carrying anti-capital ship missiles.

One notable Ralarrad was the vessel that attacked Locanda IV during Operation Unseen Death, a Kilrathi operation to eradicate life in the Locanda System. This ship fired five biological warheads at the planet and Terran Confederation pilots attempted to intercept them, however the missiles ultimately reached their target and infected Locanda IV. The system was thereby quarantined by the Confederation.

Ralarrads were encountered on may occasions by the Confederation, usually escorting convoys or patrolling star systems. The pilots of the TCS Victory encountered many such destroyers, destroying several of them in campaigns such as the Battle of Ariel.