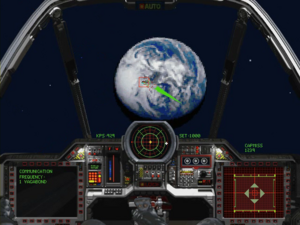 Locanda IV possesses a geography very much like that of Earth. It is a temperate, vegetated world with vast continents and oceans with several small natural satellites.

During the Terran-Kilrathi War, the Kilrathi invaded the Locanda System in an attempt to seize its vast amount of natural resources to further fuel its war efforts. The entire population was thus enslaved and forced to mine their planets on the behalf of the Kilrathi. The Terran Confederation then fought a prolonged campaign to regain control of the system, with the various colonies changing hands multiple times. In an effort to keep the colonists in line, the Kilrathi installed various raider parties to attack or steal from the helpless colonists whenever they deemed it necessary, resulting in numerous atrocities across the Locanda System for years to come.

In 2669, Crown Prince Thrakhath nar Kiranka arrived in the Locanda System to evaluate its value to the war effort. His retainer, Melek nar Kiranka, informed him that the natural resources had been depleted and the population rendered a virtually useless source of slave labor. Thrakhath had no shortage of slaves, however, so he deemed the Locanda System strategically worthless to the Kilrathi and chose to "surrender" it to the Terrans. In doing so, he launched Operation Unseen Death, the Kilrathi operation to exterminate the Locandan population.

The Confederation launched an offensive to liberate the Locanda System from the Kilrathi raiders. This effort was headed by the TCS Victory. After they destroyed most of the raiders, the Victory was informed that the Kilrathi were approaching Locanda IV and intended to infect the population with biological weapons. If the biological agent was allowed to strike the planet, the colonists would die slow, agonizing deaths and the infection would spread across the system. The half-life of the virus would be over 500 years.

The Victory ordered Colonel Christopher Blair and his flight wing to destroy the Kilrathi forces en route to Locanda IV. Tragically, despite their best efforts, five biological warheads struck Locanda IV, dooming the system. The biological agent spread quickly due to high air-bursts in the atmosphere. The Victory and all surviving forces then fled the system.

Locanda IV and the entire Locanda System was subsequently quarantined by the Confederation and are considered total losses. The fall of the planet led to the fall of the Delius and Trafalgar Systems, and forced the Confederation to abandon its base of operations in the strategically-vital Blackmane System. Operation Unseen Death resulted in a major victory for the Kilrathi.