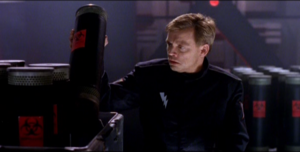 Colonel Blair discovers the Gen-Select Bioweapon on the Axius Starbase.

The Gen-Select Bioweapon was a biological weapon developed and tested by the Black Lance, an illegal faction of the Terran Confederation. It was designed and developed by bio-convergence chemist Tuesday Brody.

The Gen-Select Bioweapon is the ultimate realization of the research committed to the field of bio-convergence. The weapon was designed as a large collection of microscopic nanobots deployed to its target by means of canisters launched by fighters, which enabled for a rapid atmospheric spread that could consume an entire planet. These nanobots were pre-programmed by the Black Lance to detect certain genes and traits in a human individual's DNA strands that were considered undesirable by the Black Lance leadership. The Black Lance sought to "purify" the human race through the selective extermination of those who were considered incapable of contributing the future defense of humanity. If the nanobots found an undesirable DNA strand, they attacked the individual's RNA, effectively stopping cell reproduction and subjecting the victim to an agonizing death in which their bodies rapidly deteriorated and mutilated beyond recognition. The victim usually died within a matter of hours. Only those individuals whose DNA matched the standards programmed into the nanobots were those who were spared from death.

The Gen-Select Bioweapon was commissioned by the Black Lance in the aftermath of the Terran-Kilrathi War. During the Border Worlds Conflict, in which the Black Lance were instigating war between the Terran Confederation and the Union of Border Worlds, Black Lance leader Geoffrey Tolwyn sought to prepare the human race for when its survival might again threatened by an alien species. To ensure humanity's readiness, he sought to genetically purify it by separating the strong from the weak, and set a strict set of standards for those whom he considered fit to defend the human race when the time came. The Gen-Select Bioweapon was designed with the intent of cleansing the entire human race of those whom the Black Lance considered genetically inferior, so they would not impede humanity's defense.

During the conflict with the Border Worlds, Admiral Tolwyn sought out bio-convergence chemist Dr. Tuesday Brody, the Terran Confederation's foremost expert in the field of bio-convergence. During the conflict, Dr. Brody was captured by the Border Worlds and held captive on the Masa Science Station. To ensure their intentions were not prematurely revealed, the Black Lance ordered the TCS Lexington, commanded by Black Lance operative Hugh Paulsen, to extract Dr. Brody from the station. The pilots and marines of the Lexington, many of them unaware of the true nature of the mission, were successful in capturing the laboratory and rescuing Dr. Brody. She was then transferred to the Axius Star Base in the Axius System, where she was held hostage and coerced into designing the Gen-Select Bioweapon against her will.

The Gen-Select Bioweapon was produced without approval from the Confederation Senate, and was one of many illegal weapons produced by the Black Lance.

The grisly aftermath of the Gen-Select attack on Telamon.

When the weapon entered production, Tolwyn ordered that the weapon be tested on a Border Worlds colony to prove its effectiveness in its role. The Black Lance selected Telamon, a backwater colony on the outer fringes of the Union to be the target. The attack was carried out by a squadron of F-107 Lances led by Seether, the Black Lance wing commander, who proceeded to the colony's surface and deployed the weapon into the planet's atmosphere, releasing a swarm of nanobots that enveloped the colony. In the hours that followed, the colonists were selectively slaughtered by the nanobots, prompting the survivors to send a distress signal to the Border Worlds Militia. The BWS Intrepid was the first to respond and Colonel Christopher Blair escorted a contingent of marines to the surface. The Border Worlds forces were too late to stop the attack and 90% of the planet's population had been killed. Telamon was declared a total loss.

The attack was declared a complete success by the Black Lance, and Admiral Tolwyn announced his intent to use the weapon on the entire human race. Colonel Blair tracked the Black Lance attackers to Axius, where he discovered Tolwyn's plans as well as the weapon's designer, Dr. Brody. Brody and Blair attempted to flee the star base but Brody was fatally shot by Black Lance guards, forcing Blair to retreat alone with the data.

Blair pursued Tolwyn to Earth from the Intrepid and during the pursuit was successful in killing Seether, who led the attack on Telamon. Blair then addressed the Confederation Senate, where he revealed the Gen-Select Bioweapon's existence to them. The Senate was outraged to learn of the weapon's illegal commissioning, as well as its use against the Telamon colony. The revelation of the bioweapon's existence was instrumental in the Senate's rejection of a declaration of war against the Border Worlds and the subsequent court-martial of Admiral Tolwyn.