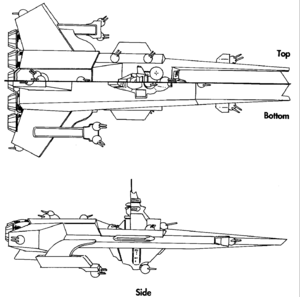 However, in 2642, Terran Confederation military command authorized the conversion of remaining in-production hulls to a heavily revised second flight design. The first of the new ships, the TCS Tiger's Claw (CV-07), was commissioned at the Trojan IV shipyard two years later (2644). It was included in Joan's Fighting Spacecraft Vega Sector Supplement for 2654.092.

The Tiger's Claw immediately began what would become one of the most storied individual combat records in history, routing a Kilrathi invasion force while still on her shakedown cruise. Minor design changes to subsequent Bengals reduced their total length to 690-meters, the TCS Kipling being the first Bengal to reflect these changes, and made the 700-meter Tiger's Claw the largest strike carrier in the fleet.

The Bengals were designed to undertake deep-space assaults against Kilrathi positions without the need for escorting vessels. These ships were designed as all-purpose vessels that could operate without escorts or assistance in combat.

The TCS Tiger's Claw was by far the most famous ship of this class. Among her exploits, she routed a Kilrathi invasion force, liberated the Vega Sector in 2654, destroyed the Kilrathi fleet responsible for the destruction of Goddard in 2655, and ensured the entry of the Firekkans into the Terran Confederation later that year following a massive Kilrathi invasion. Some of the finest pilots ever to serve in the Confederation Space Navy served aboard the Claw, including then-Lieutenant Colonel Christopher Blair.

The final Bengal-class carrier was due to be commissioned in 2657. Surviving Bengals continued to serve the Confederation with distinction throughout the remainder of the Kilrathi War. TCS Wolfhound served into the late 2660s, notably at the Battle of Vukar Tag where she and the TCS Concordia were the only two Confederation carriers to escape undamaged. She served as Admiral Wayne Banbridge's flagship before and during the battle.

The Bengal class has been Confed's primary utility carrier since before the Pilgrim War (first commisioned in 2619). Development on a replacement carrier is ongoing, with a scheduled rollout no later than 2657, but for now the sturdy Bengal remains the mainstay of Confed's fighter operations.

The Bengal class includes hangar space for up to 104 fighters or bombere― enough for one to four full squadrons (depending on the ship's mission). Given reasonably experienced pilots and crew, a Bengal is capable of executing a full flush scramble (launching all 104 fighters) in as little as 12 minutes.

Modern Bengal-class ships carry enhanced map room imaging facilities for planning tactical operations. Crew capacity is 550 (including pilots and flight deck personnel), plus space for a marine complement of 50. In addition to full hangar and repair facilities for its fighters, a Bengal class can also carry and service corvettes and light transports with a cross-section of no more than 35 meters.

In addition to its fighter complement, the Bengal class mounts eight turreted lasers for antifighter defense. Its torpedo tubes are primarily used for ship-to-ship munitions, but can be modified for strategic ship-to-planet devices.

Over the years many fans have contributed their artwork showcasing the Tiger's Claw.