The Flat Universe picture of the week shows off some of that heavy ordnance being released. The F-95 Morningstar is firing its signature Mace tactical nuclear missile. On the left, the F-103 Excalibur is equipped with a lighter variant - perhaps what we see the TCS Princeton carrying in WC4? Both will lay on some pretty serious destruction to whatever is on the receiving end! 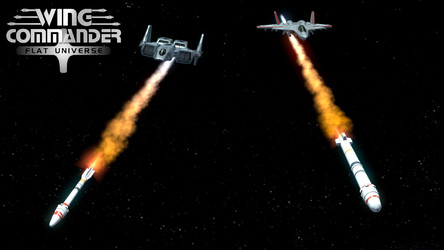 Meanwhile, on a remote Conferderation nuclear test centre. Operation "Armageddon" is a GO!

Our development is on the final stage of multiplayer missile firing. After countless missile tests and arguing we have reached the desired result. Therefore, we give you a "Warning: No children allowed!" screen-shot showing off the two mace choices that you will have inside Flat Universe.

Tip: Be especially careful with the use of those two. Nuclear weapons are not toys!:cool: